In Central and Eastern Europe, wage convergence with the West has stalled – and people are blaming Germany.

Germans are by now used to the fact that many people in Southern and Western European have not always been happy with Germany’s economic policy stance, especially its insistence of austerity during the euro-crisis. However, what has gone mostly under the radar is the fact that discontent with Germany’s economic dominance is also growing outside the euro area, and especially in the Central and Eastern European member states.

I observed this recently at a centre-left panel in the run-up to the Czech elections (scheduled for October 20/21). What quickly became obvious from the remarks of the participants is that there is deep anxiety about the fact that Czech wages are no longer showing much sign of catching up with the German level. While the 1990s and early 2000s saw a steady convergence, there has been no progress since 2007. 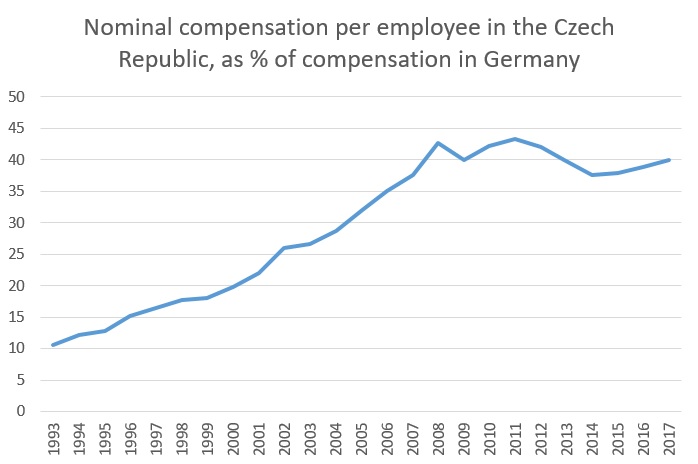 The blame for this aborted convergence is laid squarely at the foot of foreign investors, with a narrative that “Germany, France and the US have invested in the Czech Republic and are now syphoning off the profits while the Czechs stay poor”.

The source of discontent is that by now, basically all of the financial sector and half of the manufacturing sector is foreign-owned. The multinationals set the prices for the intermediary products that Czech factories produce, and by setting these prices low, they suppress wages in Czech Republic while boosting their margins.

One story which seems to be endlessly retold is that workers at the assembly lines at Volkswagen plants in the Czech Republic only earn a third of the wage of VW workers in Germany, even though the assembly lines run at the same speed at the ones in Wolfsburg. Hence, even though physical productivity of these Czech workers is supposedly the same as in Germany, wages are significantly lower. The value added thus extracted then can be distributed to German Volkswagen workers and shareholders – with alleged tacit support from the German government.

This change in the perception of the role of German companies is especially striking as many Central and Eastern European countries have long seen Germany as their main advocate in their quest for income convergence with the West. The Czech Republic, especially, had long endorsed an explicit policy of inviting foreign investors into the country to speed up their integration with global (and EU) markets.

This feeling of being second-class Europeans when it comes to wages also has consequences for other policy fields. One of the discussants went as far as saying that the Czechs’ resistance against accepting refugees comes from the feeling that Germany is behaving like an “imperial power”, and that the Czechs would have accepted refugees had Germany facilitated proper wage convergence.

This may be an exaggeration, but it demonstrates a surprising level of discontent with the economic bargain of EU membership. And it suggests that Berlin and Brussels may have neglected the issue of living standards in Central and Eastern Europe somewhat due to their understandable preoccupation with the euro crisis in the Union’s ‘inner core’.

Redressing this balance now looks necessary if the EU wants to constrain the growth of populism in these newer member states and keep them committed to the European project.