This article is part of ECFR's Wider Europe Forum

The deployment of Iskander missiles in Kaliningrad has raised fears in Europe that the territory is becoming Russia's key battle-station.

The deployment of Iskander-M missiles to Kaliningrad in October 2016 was the latest step in the continued militarisation of the Russian enclave. Previously hailed as the pilot region for EU-Russia relations, and even Russia’s answer to Hong Kong, it is instead turning into a military bastion, a key outpost of the ‘Russian world’, and an ideological battlefield between Russia and the West. What was once referred to as the ‘Kaliningrad puzzle’ has quickly become the ‘Kaliningrad headache’. 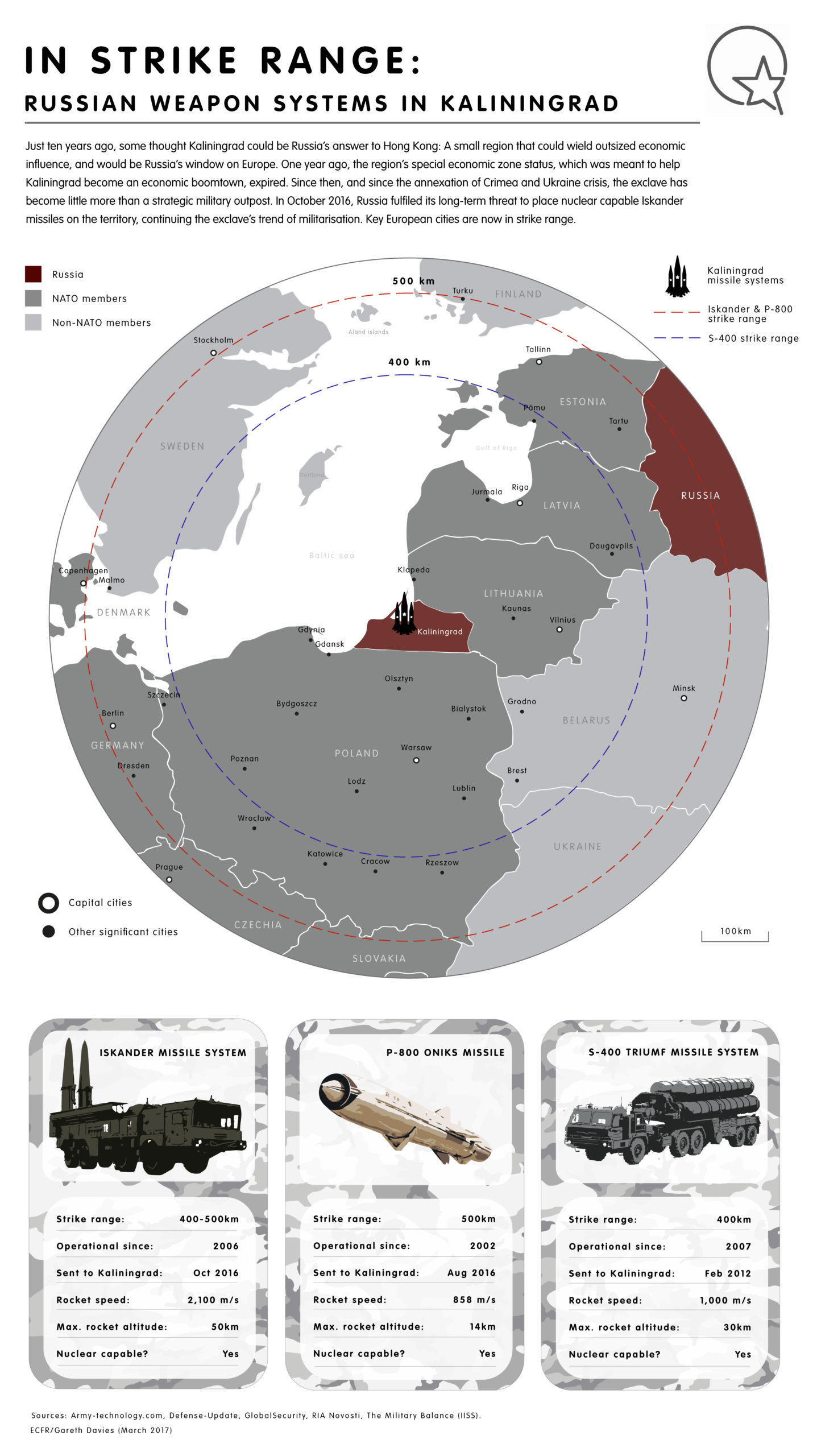 In 2017 Moscow has appeared determined to upgrade military capabilities in the oblast, which it sees as a key strategic territory. Kaliningrad oblast has hosted a number of military exercises, using its most advanced weaponry, including the S-400 Triumf surface-to-air missile system, the P-800 Oniks anti-ship cruise missile, and the formidable Iskander-M ballistic missile system that can destroy targets within a 500 kilometre range. The deployment of these systems has drastically increased the strategic military importance of Kaliningrad, for both Russia and Europe. And it’s not just about the missile systems; Russia’s Baltic Sea Fleet also seems to be winning back its prestige after the embarrassing July 2016 scandal that led to a wide-scale purge and the replacement of top-rank commanders.

However, even these events are somewhat overshadowed by the upcoming Zapad 2017 strategic joint military exercises that will be held by Belarus and Russia in the autumn. It will be the first edition of the games to take place since 2013, and in keeping with tradition, part of the games will be hosted by Kaliningrad. In 2009, the games centred around a mock invasion and conquest of the Baltic countries, as well as a mock nuclear strike on Poland, while in 2013, the games prepared Russian troops for the same thing, but a mock nuclear strike was carried out on Stockholm. NATO countries have always been alarmed by this, but today the level of anxiety is particularly high, especially in the Baltic States. The President of Lithuania, Dalia Grybauskaite, openly referred to the games as “Russian preparation for war with the West”. Indeed, these military exercises should not be separated from the overall atmosphere in Europe regarding the military conflict in Ukraine, Russia`s activities in the Black and Baltic Sea regions, and, of course, its militarisation of Kaliningrad. All of these factors, taken together, have ramped up the tension on the European continent.

In June, a few months before the war games begin, Kaliningrad will host a special session of the Security Council of the Russian Federation. The session is expected to bring to light new information about Moscow`s regional strategies and the future role of the oblast. Top ranking Russian officials are already in the habit of reiterating that “Kaliningrad is one of the most important Russian regions in terms of military security and that the entire strategy of NATO containment is based on the military capabilities of Kaliningrad”. We can expect much of the same from the June meeting.

At the vanguard of the ‘Russian World’

In addition to rigorous militarisation, Moscow is acting in line with the views presented by Patriarch Kirill of Moscow, who, in March 2015, stated that Kaliningrad is the new “ideological battlefield between the West and Russia” and a “beacon of the ‘Russian World’ in Europe”. For this purpose, Moscow is continuing to eliminate vestiges of ties between the oblast and Europe. In January 2017, the Russian Ministry of Foreign Affairs cancelled their experimental initiative to grant foreigners 72 hour visas, citing lack of demand.

Very soon after, on 27 January 2017, one of the oldest and most respected NGOs in Kaliningrad − the German-Russian House − was labelled a ‘foreign agent’ and forced to close-down. In fact, the local government and the Russian Orthodox Church have proclaimed a war on the remaining German cultural legacy in the oblast. For instance, the Patriarch himself referred to the German cultural legacy as a series of “old stones that should not be revered or given predominance over the legacy of Russian national culture”. The statements made by the Russian Orthodox Church and their attacks on the existing cultural legacy are seen by many as acts of cultural barbarism.

Instead, the local government promotes the cult of patriotism with a visible militaristic component. The number of patriotic organisations and movements in the oblast has mushroomed in recent years. Among them, the notorious Russia-wide “Yunaria” (Youth Army) has been given responsibility for the ‘patriotic upbringing’ of the local youth. The initiative for promoting these organisation was conceived by the Russian Ministry of Defence, which is aiming to nurture a new generation of  Russian patriots. It started operations in late 2016 and while participation is not yet obligatory, the groups already assemble gatherings of over 56,000 pupils.  In the meantime, ‘Russian Army’ branded goods are increasingly popular, following the pompous opening ceremony of the first Kaliningrad branch of ‘AO Voentoreg’ − a store selling Russian military accessories. Their collections target both adults and children. The most far-reaching Kaliningrad agitations, in terms of soft power, took place in Vilnius − the Lithuanian capital − where the Russian Embassy started disseminating provocative leaflets offering Lithuanians the chance to abandon their country for Kaliningrad.

In 2009, when Russia began taking its first steps to turn Kaliningrad into a military outpost, European politicians − with few exceptions − didn’t pay too much attention. Today, everything has changed. All regional players are alarmed about the trajectory of the oblast, and even traditionally peaceful countries, such as Finland and Sweden have begun taking action. Sweden has restored its garrison in Gotland, a small offshore piece of territory, and on 2 March it also announced that it is bringing back military conscription. In Helsinki, talks about strengthening cooperation with NATO are becoming much more frequent. Even Germany, which many thought of as the cautious ‘Russian advocate’ in the EU is now expressing more and more concerns.

Other regional players seem to be even more perplexed by Russia`s behaviour. Poland, Lithuania, and Latvia are seeking a greater NATO presence on their territory, whereas Estonia is in the process of trying to upgrade its military budget to an historically high level. On the non-military front, Warsaw has practically cancelled the 2007 Small Border Traffic agreement with Kaliningrad, which allowed visa free travel for people living 30 kilometres either side of the border, and is now planning to build an alternative sea canal bypassing the oblast, so that it can easily access parts of its coast by sea, without transiting through Kaliningrad.

Indeed, despite being sandwiched in by EU member states, Kaliningrad has the strategic upper-hand. The measures NATO has put in place to strategically hedge against Kaliningrad pale into insignificance when one considers the threat posed by Russia. NATO forces stand no chance in competition with Russia. Using Suwalki Gap, Russia could easily cut off Baltic States land connection with its allies. On the sea Russia already also has strategic superiority, given its Kaliningrad and Kronstadt bases. War-game scenario planning by the RAND corporation concluded that NATO would not be able to defend the Baltic countries under any circumstances for longer than 60 hours – even if its new battalions were in place. Whether NATO can do better than 60 hours or not is open to debate, but in any case it would need to fly- or ship-in reinforcements across the Baltic sea to push back against the Russian military onslaught. The long-range weapon systems in Kaliningrad – the S-400, the P-800, and the Iskander – will make that a risky, and maybe even impossible, undertaking. NATO would have to remove the threat posed by these weapons-systems first, which would mean attacking targets on the territory of the Russian Federation proper, risking further escalation or even nuclear war.

The intensity with which Russia has militarised the oblast in recent years has dispelled any remaining illusions about Kaliningrad becoming a bridge of cooperation with the West, as many once hoped. Dreams of economic reform and the integration of Kaliningrad in the Baltic region are vanishing fast, causing the oblast to bitterly resemble a previous version of itself from 1991, when it was little more than an isolated military bastion of the USSR.

Regretfully, the situation today is much more complicated than back then. Accretion of military might in the oblast is just one facet of Russia’s regional strategy. In its arsenal are also tools for manipulating claims of ethnic identity or belonging, and the development of patriotic propaganda to reinforce the idea of Kaliningrad as the tension point between Russia and the West.

The long-held hope that Kaliningrad could be an economic boomtown have been dashed. For the Kremlin, Kaliningrad is little more than a pawn used strategically. But in doing so, it has proven its ability to unnerve and unsettle others in the region.

Sergey Sukhankin is a native of Kaliningrad, currently working on his PhD at the Autonomous University of Barcelona (UAB). He is also an Associate Expert at the International Centre for Policy Studies in Kyiv.