1. What are polls saying?

What polls are telling us is that a long cycle in Spanish politics may end on Sunday. Since 1982, two parties, the Conservatives (PP) and Socialists (PSOE), have been able to form the government and replace each other. Together, they’ve gathered 75-85 percent of the vote. But having already seen the collapse of the socialists, who dropped from 44 percent of the vote in 2008 to 28 percent in 2011, and now face a further decrease that is likely to leave them on just 21%,  the Conservatives are now likely to go down a similar path, from having 44 percent in 2011 to showing just 27.5 percent according to the average of polls.

The shrinking of the two main parties, from 83 percent of the vote in the last general election before the crisis, to just under 50 percent, runs in parallel to the emergence of two new parties: Ciudadanos, on the centre-right, headed by Albert Rivera, with polls giving them 20 percent of the vote, and Podemos, left of the Socialists, headed by Pablo Iglesias, getting as much as 16 percent. 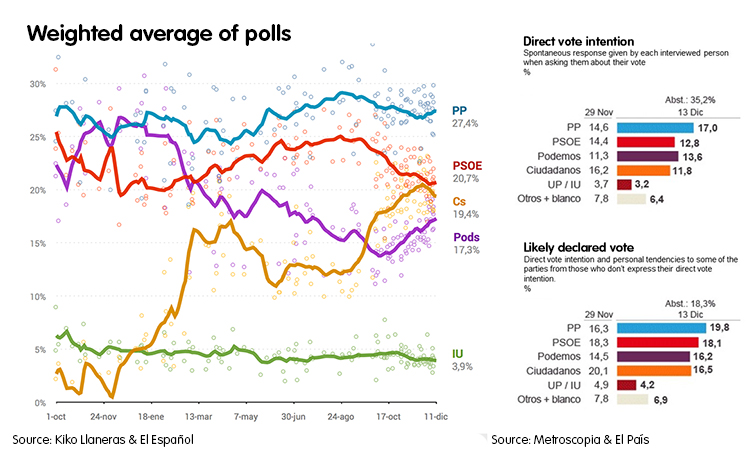 Seats projections based on these numbers indicate that, even if they receive the most votes, the Conservatives will lose their current majority and will be unable to form government on their own (an absolute majority requires 176 seats in a parliament of 350, with the PP currently having 186).

From there, the most likely alternative majority is one that aligns PP and Ciudadanos. But Rivera has openly said that he will not support a PP government headed by Rajoy because of the party’s poor record on corruption and economic management.

Another possible coalition is one brings together the Socialists, likely to finish second, with Ciudadanos. However, here too, Rivera has said he will not enter into coalition with the Socialists, whom he sees as a party of the past.

The next possible coalition, one that pairs the likely second and fourth parties – PSOE and Podemos – this is the least likely for two reasons: first, their aggregated seats may still leave them short of a majority; second, Pablo Iglesias says he will not support the Socialists if he gets fewer votes than them, i.e. Podemos would only accept a coalition if it finished above them.

3. Should we worry about political instability after the elections?

Albert Rivera and Ciudadanos are going to be the kingmakers. They can support the Conservatives or the Socialists and therefore open the way for a stable government. However, Rivera has said he does not want to end up like the Liberal Democrats in the UK, heavily penalised by voters for promising change but supporting the status quo. Rivera’s calculations will be key: if he thinks that by not throwing a lifeline to Rajoy he can provoke his resignation and a crisis within the PP, he may be tempted to sit and wait for new elections in which he might annihilate PP and turn Ciudadanos into the new big party of the Spanish centre-right. The same goes for Podemos, which may also be tempted, much as happened in Greece with Syriza and PASOK, to provoke tensions within the Socialists and finish them off at a later stage.

So, stability much depends on how parties, especially the new ones, read the results, and whether they think they can do better off by not cooperating with the old ones.

4. Podemos was very strong in January, why has Podemos lost support?

Podemos has been very effective in representing discontent with the old parties and complaints about political corruption, as well as protesting against the rise of inequality, austerity cuts in the health and education system and the steep increase in unemployment, especially among the young people. But they’ve been better at pointing out what was wrong than proposing solutions, which are often considered too radical or just unfeasible by many voters. Also, because of the appearance of Ciudadanos, Podemos has been losing support in the centre, where the bulk of the unsatisfied voters were.

5. What makes Ciudadanos so popular?

Ciudadanos is a party that is quite effective on different fronts and to different people. It addresses the concerns of most anti-nationalist voters in Catalonia as well as those unhappy with corruption and traditional politics. It’s also a party which appeals to young voters and the urban middle classes. And its economic proposals are pragmatic and centrist. Contrary to Podemos, Ciudadanos represents change from the old orthodoxies, but it does not scare away those voters who may worry about the radicalism of Podemos. 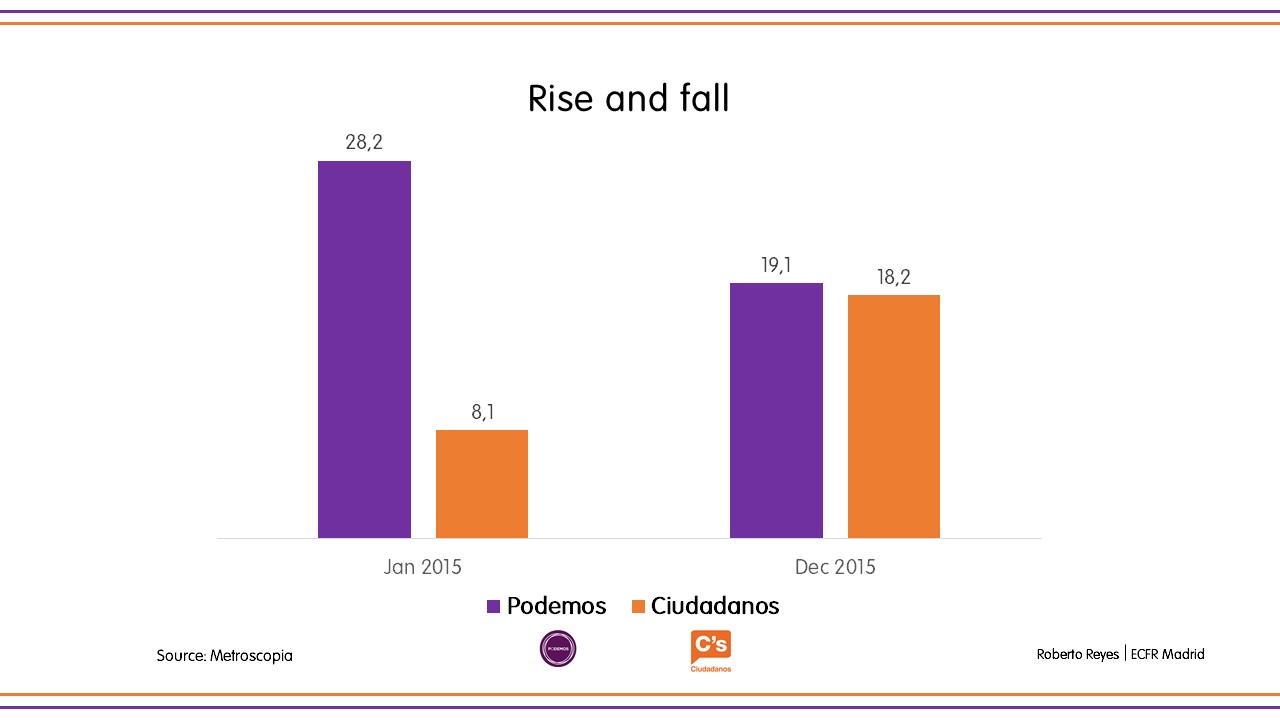 6. If the economy is going well, why is it that the government is not doing well in the polls?

The economy is doing well on the aggregate, with exports picking up and firms deleveraging, but the effects of the economic recovery are not trickling down to those who’ve have been hardest hit by the crisis. Public feeling is very negative with two-thirds of Spaniards thinking that both the economic and political situation is bad or very bad and it is not likely to improve in the next year.