Spain is a bulwark of pro-European values and a progressive immigration policy. The poor performance of the conservatives in the parliamentary elections sends an important message to conservative parties Europe-wide.

Spain election: A win for “No pasarán”?

Pedro Sánchez united the vote in the face of the Vox threat. The other big winner was Ciudadanos – which could now supplant the conservative PP as the main opposition

How do Europeans see their future and what  do they really want?

Spain's snap election will be of “existential importance” – below, an explainer to get ready for Sunday outlining the contenders and possible outcomes

May's European Parliament election will shape the future of Italian political parties – will it enable traditional mainstream parties to stage a recovery?

Is winter coming to the EU?

Many observers expect a grand showdown between the forces of “open” and “closed” societies in next month’s European Parliament elections, with the very future of the European Union at stake. They are right to be worried, but wrong about the reason

Kingmakers of the mainstream: predictions for the European Parliament election

The next European Parliament will be finely balanced between the left bloc of socialists and greens, the European People’s Party, and anti-European parties 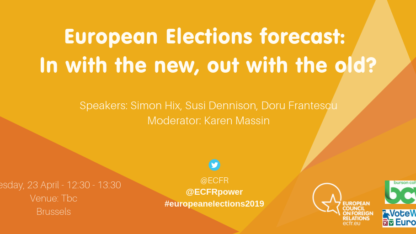 European Elections forecast: In with the new, out with the old?