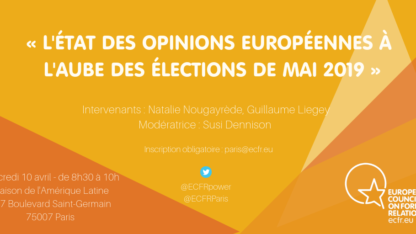 A majority of Europe’s voters do not consider migration to be the most important issue, according to major new poll

Corruption, living standards, housing, unemployment and health rank above, or alongside, migration as key issues for European voters. Despite anti-immigration rhetoric across Europe, many voters view domestic issues as chief concerns. Voters in Greece, Italy, Poland, Romania and Spain are more concerned about people leaving their country than coming in.

Mark Leonard speaks with Simon Kuper, Tara Varma and Manuel Lafont Rapnouil about the Yellow Vest Movement, and whetherit’s only a French phenomenon. The podcast…

Right-wing populists think voters obsess about immigration. But that’s not the case.

Hungary and the EU: When streetfighters enter coffee-houses

Viktor Orbán may reject the EU’s way of doing things. But the political maelstrom he has helped unleash could equally see him floored

Sleeping with the enemy: the dangers for Europe of accommodating nationalists

Politicians from Macron to Di Maio have co-opted right-wing nationalist strategies in order to reach disillusioned voters. Instead, Europe's leaders must focus on crafting a new narrative ahead of May's EP elections.

How Europe’s populists can win by losing

The European Parliament elections this May have been described as a make-or-break moment for the future of the European project – and for good reason. With plans to form a populist united front, Eurosceptic parties need only capture one-third of parliamentary seats to bring EU governance to a crawl.