Why Europe needs a recovery plan for strategic autonomy

Just as they have on the economic recovery, Berlin and Paris must overcome their differences and present a courageous plan to create a Europe that takes decisive geopolitical action

The limits of “no, no, no”: Why the Dutch are so ambivalent about Europe

China’s attempts to divide Europeans during the crisis, along with its fierce and openly hostile rhetoric targeting the capacity of Western democracy to effectively respond to the health emergency, have served as a wake-up call 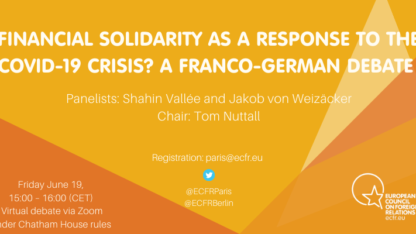 Financial solidarity as a response to the Covid-19 crisis? A Franco-German debate

Dear Madam, Sir, dear friends, The Berlin and Paris offices of ECFR are delighted to invite you to a virtual debate: “Financial solidarity as…

Europe’s way out of the coronavirus crisis: from self-interest to solidarity?

The coronavirus crisis brought about financial hardship for the European Union, and many agree that a recovery fund would be needed to overcome it. In…