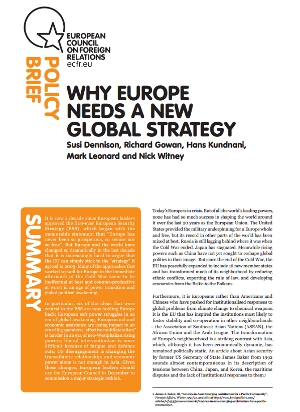 It's groundhog day again. In the movie of that title, Bill Murray wakes morning after morning to find himself stuck in a time-loop; everyone around him is unwittingly reliving the previous day. The run-up to next month’s European defence summit is fast acquiring the same surreal aura, as projects first mooted a decade ago are dusted off for ‘endorsement’ by the assembled national leaders – with no conviction in anyone’s heart that they will fare any better this time around.

Last week EU defence ministers met in Brussels to ‘prepare’ the summit. As ever, they relied on the European Defence Agency (EDA) to tell them what they wanted. The Agency duly proposed that they back joint programmes in the fields of air-to-air refuelling; satellite communications; drones (known these days as Remotely-Piloted Air Systems, or RPAS); and cyber defence. The Ministers were happy to adopt the EDA’s suggestions, as their ‘contribution’ to the December summit.

Of course, these are all sensible priorities. In each case, Europeans face substantial capability gaps which will only be filled if they work together, pooling efforts and resources. RPAS are particularly vital, since they bear on security as much as military concerns (think border surveillance), and will in due course have almost limitless  commercial applications – starting no doubt with the first flight of a drone from Frankfurt to London loaded with DHL or FedEx packages. Today, after fifteen years of European dithering, the Americans and Israelis dominate the field – and Europeans are pretty much out of time if they want to catch up. The key lies, as the EDA’s proposals reflect, not just in collaborating on building particular drones, but on a shared European effort to master the systems and technologies (such as mimicking the ‘sense and avoid’ capacities that enable bats to stay out of each other’s way) which will allow pilotless aircraft to operate safely in Europe’s crowded airspace.

I happen to know a bit about this, since ‘integrating RPAS into regulated airspace’ was an idea that got us all very excited in my own last months with the EDA, in 2007. Then, as now, both industry and the Commission were keen to support. Then, as now, defence ministers thought it a splendid idea. The significant difference, of course, is that then the target date was 2012; now it has drifted out to 2020-2025.

I do not know exactly how or why that earlier initiative ran into the sand; but I can guess. Typically, the support of member states for any such collaborative effort would last up to the issue of the communique which would announce the new project, and allow the relevant ministerial meeting to be declared a success. Thereafter, national priorities rapidly reasserted themselves. The EDA has few resources, and no executive authority; it can exhort and cajole but cannot direct. It can lead the member states to water, but cannot make them drink.

Only strong political leadership from the top will break this cycle of failure. If anyone expected the defence ministers to provide it ahead of the summit, he will have been disappointed. Their ambition may be judged from their review of Catherine Ashton’s own proposals for the summit, which propose to national leaders the undemanding tasks of ‘expressing a strong commitment to defence cooperation in Europe’, and ‘communicating to the wider public that security and defence matter’. (In fairness, she has 22 other recommendations for them – almost all introduced with such incisive verbs as ‘endorse’, ‘encourage’, ‘emphasise’, ‘support’, and ‘call for’. Nothing here to disturb the summiteers’ digestions.) Ashton was able to tell the media afterwards that her report was ‘very warmly welcomed’ by the assembled ministers.

So history is well on the way to repeating itself. The stage is set for December’s summit to announce some dynamic-sounding initiatives (as well, of course, as lots of ‘endorsing’ and ‘urging’), which will keep staff officers and consultants happily engaged for years to come, but never actually require the member states’ bureaucracies to undergo the inconvenience of really working together, or revising pre-existent national plans.

Of course, national leaders would be perfectly able to break out of this time-loop if they truly wanted to. They could, for example, ‘welcome’ the proposals on RPAS – but then demand more. They could point out that civil aerospace is one of the last remaining jewels in Europe’s industrial and technological crown, and that RPAS will be a significant part of its future. They could condemn the wasted opportunities of the past that have put Europe now a decade behind the curve. They could call for a major concerted effort of governments, industry and the Commission to catch up, before it is too late. And – the edge on the sword – they could declare the proposals in front of them, for ‘roadmaps’ and ‘workstrands’, as inadequate to the challenge, and require that a comprehensive, costed plan to achieve the integration of RPAS into European airspace within three years at most be presented for their review at their May summit next year.

If only groundhogs were not so fond of their cosy burrows.