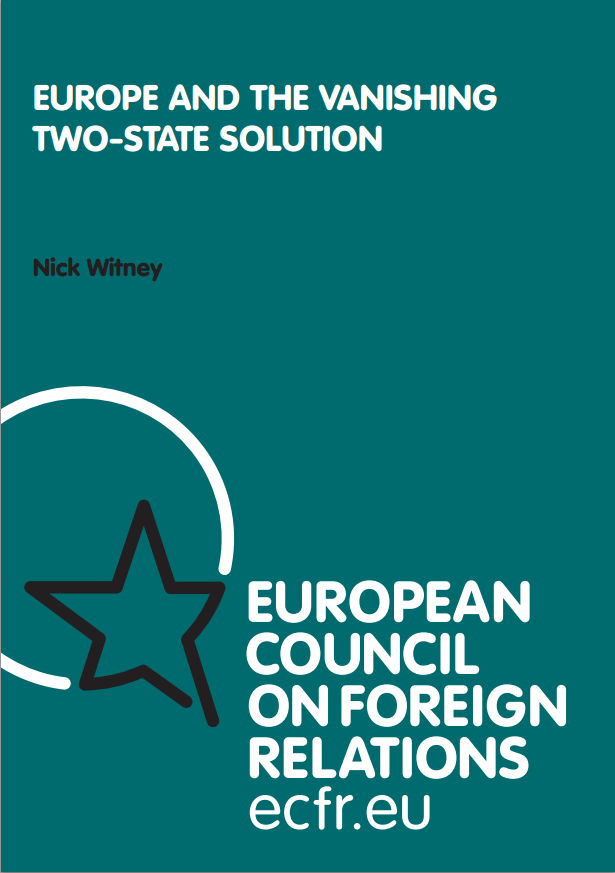 For too long, Europe has been content to assume the role of the chorus in a Greek tragedy, voicing a stream of anxieties and lamentations but leaving the action to others. The point of a common EU position ought to be to exercise our collective weight, not just herd together for safety.

As the prospects of a two-state outcome on Israel/Palestine fade, that collective weight needs to be more strategically deployed. A new ECFR report attempts to suggest how that might be done, in order to more effectively restrain Israel’s entrenchment of its occupation and to sustain the Palestinians.

The remorseless expansion of settlements, the lock-down of Gaza, and the systematic undermining of the Palestinian presence in East Jerusalem and in the West Bank have eroded the basis for a two-state solution almost to the point of collapse. But four million Palestinians will not simply go away. By continuing to entrench its occupation, Israel risks the fate of Apartheid South Africa: sanctions and international isolation.

Already, polling and recent U.N. votes show that Israel is “losing” Europe. But the message is muffled, because Europeans undercut their own calls for an end to settlements and the occupation by continuing to strengthen commercial, defense and scientific ties with Israel. Meanwhile, one billion Euros in annual aid from Europe to the Palestinians has produced a dependency economy, with the real economy progressively hollowed out.

Europeans need to apply tougher love to both parties before it is too late.

When considering Europe’s relationship with the Palestinians, it is often observed that European aid may perversely be serving to prolong the occupation by softening its material impact on the Palestinians, and its financial impact on the Israelis. The latter, of course, should by rights be bearing the costs of their occupation; the fact that they have passed the bill to Europe obviously makes it easier to subsidize the settlement enterprise.

Europeans are coming to terms with the realization that in their new era of austerity ushered in by the financial crisis, continuing aid to the Palestinians at over €1 billion annually must be unsustainable. But what then is to be done?

For European donors, the strategy should be to put the Palestinian Authority on notice that the days of the dependency state are numbered – but that Europe will stay around long enough to assist them in shifting their focus from “state-building” to “economy-building,” from running a large public sector to enabling the private sector to generate jobs and tax revenue. Together, Europeans and the Palestinian Authority should work out what that will require in terms of better access to resources and markets. Critically, this would require the Palestinian Authority to shift its mindset from “but we can’t do that because of the occupation” to “these are the things we need to do – and the terms of the occupation must change to allow us to do them.”

Europe’s relationship with Israel is more complicated. Some of the proposed steps fall into the more obvious category. Stop extending benefits (market access, EU grants, etc.) to settlement-based individuals and enterprises as though they were resident of Israel proper. And stop hugging Israel closer without looking for reciprocal moves. The most recent Association Council meeting in July 2012 identified a list of 60 concrete actions in 15 fields (migration, energy, transport, and so on) whereby the EU–Israel relationship could be further thickened. The EU should take no further steps to more closely associate with Israel and its economy without parallel moves by Israel to relax the occupation.

Key, though, is how best to bring it home to Israelis that their present policy will ultimately be self-destructive, and therefore that they must change course. Israelis might reasonably feel relaxed about the practical significance of losing European sympathy—were it not for the mounting evidence that, the U.S. aside, Europeans are about the only friends Israel has left.

At the U.N. and elsewhere, there is a one-way ratchet at work. Steps that may seem to those outside the world of diplomacy as arcane are all headed in one direction, and diplomatic and legal processes can take on a life of their own. Abbas may not himself be much interested in building on the Palestinian Liberation Organization’s new status at the U.N., to exploit other international platforms from which to pressure the Israelis, but if de-occupation remains at an impasse and a chance appears to bring the issue of Israel’s continued occupation of the West Bank and Gaza in front of the International Criminal Court, it will be hard for the Palestinian leadership to resist.

Such theatrical developments on the global stage will have – and are already having – real-world effects. European readiness to back Israel right or wrong is diminishing, and Israel needs to take with deadly seriousness the prospect that, with current trends, it could one day find itself exclusively reliant on the U.S. for diplomatic support in the face of a hostile global campaign.

Against this background, Europeans owe it to themselves, the Palestinians, and indeed the Israelis to bring home to the latter the extent of the peril they are creating for themselves. Slavish adherence to all relevant U.S. policy positions is not a prerequisite for such a role. On the contrary, Europeans can introduce new dynamics into the debate that Americans simply dare not do, to “run interference” for the U.S. and put a little weight behind their own policies. The more Europe conveys its impatience with Israeli expansionism, the better the chance that the debate within Israel will turn to the risks of “losing Europe” – and the more leverage the Americans will have, if they are willing or able to exercise it.

The article first appeared in the Daily Beast.