You can also read and share this article in French and Spanish.

Are you interested in knowing what to think on Sunday night/Monday morning about the results of the European elections? Here’s a pocket-guide with three questions – not ranked in order of importance – that you can check out yourself. 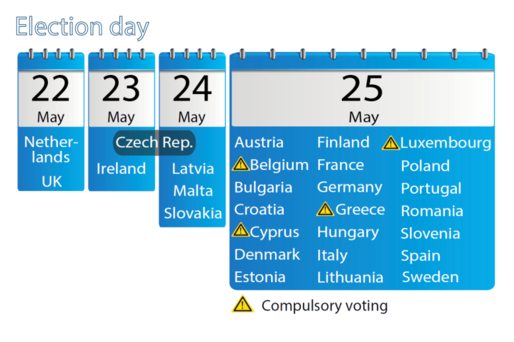 Participation has been dropping, from 62% when the first elections were held in 1979, to 43% in 2009 (see general table below).  But this data hides huge differences between countries. 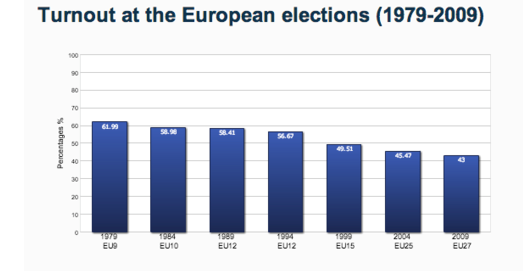 Voting is compulsory in Belgium, Luxembourg, Greece and Cyprus, so they have some of the highest turnout. But check the turnout for Denmark, Malta, Ireland and Latvia, where participation was above 50% in 2009 (all turnout numbers here are from the 2009 election). Only 8 countries were above 50%. There are 7 countries in the 40 percent range:  Austria, Sweden, Spain, Estonia, Germany, France, Finland. In the first three countries turnout is still close enough to 50% to grab our attention. But then there is a group of 10 countries (Bulgaria, Portugal, The Netherlands, Hungary, the UK, Slovenia, the Czech Republic, Romania, Poland, Lithuania and Slovakia) where turnout was below 40%. In the case of Lithuania and Slovakia it was around 20%. These 11 countries pose quite a challenge to the legitimacy of European Parliament decisions affecting them. Polls say they will again be below 50% this time around (see member state turnout estimate graph below). Watch them closely. 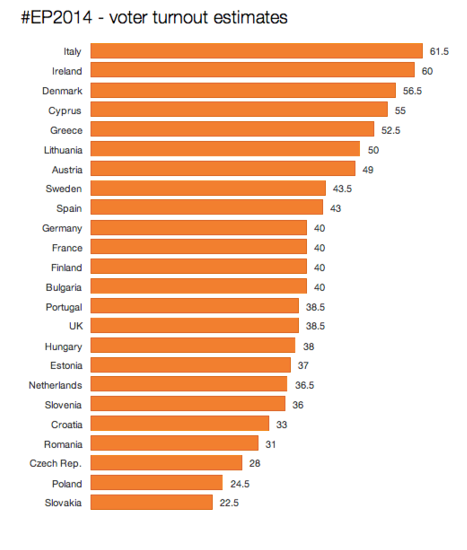 2. Watch out for the size of the eurosceptic bloc which, according to polls, will become the third political force in the new parliament. First look at the UK, France and Italy to see whether UKIP (Nigel Farage), FN (Marine Le Pen) and the Five Star Movement top the polls. If they manage to do so it will amount to an earthquake in national politics. Then I suggest looking at the German results to see how well AfD has done, PVV in the Netherlands, Austria’s FPÖ and the Danish People’s Party. Finally go to Greece and see to what extent Alexis Tsipras has been able to beat the main parties and whether or not we will have true Nazis in the European Parliament (Golden Dawn is set to get two seats). 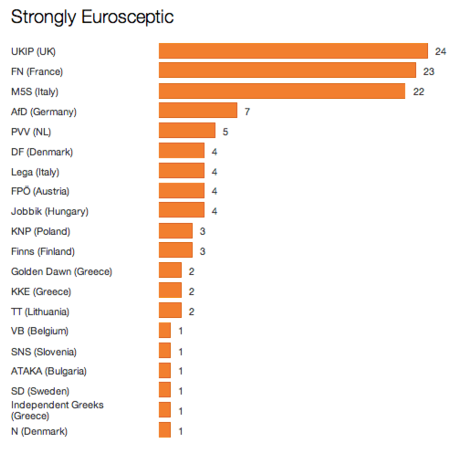 3. Last but not least check whether Juncker is sufficiently ahead of Schulz to claim that he has beaten the Socialists and then get nominated more or less automatically as President of the Commission. Juncker needs to be clearly leading Schulz, otherwise the Socialists will start questioning his victory by pointing at the  contribution of Viktor Orban’s FIDESZ (Hungary) and Silvio Berlusconi (Forza Italia) to his lead. Neither Juncker nor Schulz is likely to get an absolute majority, so they will need each other. However if they are tied, the Council may be tempted to say that no one has really won and propose an alternative candidate. That would open up a confrontation between the Council and the Parliament.

So, on election night look for turnout, beware of eurosceptics and watch how well Juncker does. And for an analysis of likely coalition, please see our previous entry “Who will run Europe after the elections?”