The new European Commission has a rare opportunity to move trade closer to the centre of the European Union’s global strategy. In a major change from the situation four or five years, trade issues no longer mobilise many voters. Back then, public discontent slowed the EU’s negotiation of the Transatlantic Trade and Investment Partnership with the United States and almost derailed the ratification of its Comprehensive Economic Trade Agreement with Canada. In comparison, as shown in a public opinion poll the European Council on Foreign Relations and YouGov conducted the day after the May 2019 European Parliament election, Europe’s trade deals were seen as an important issue only by one-third of voters in Italy and Poland, one-quarter of voters in Spain and France, and one-fifth of voters in Germany. Europeans viewed other issues – ranging from climate change to corruption, migration, the economy, security, and the rule of law – as more or much more important to their voting decisions.

But securing support from national governments and European citizens will be a challenge. The main problem in this is that Europeans do not seem to have recognised or accepted the EU’s exclusive authority over trade policy.

Another factor is the ongoing trade dispute between the US and China, which has led citizens to expect more from the EU on trade – and may, therefore, allow the Commission to become more assertive in the field. European Commission President Ursula von der Leyen seems to have already taken note of this, setting ambitious goals for the commissioner-designate for trade, Phil Hogan. He is widely expected to lead work on strengthening Europe’s ability to protect itself from unfair trade practices (through a new system for screening foreign direct investment, among other things). The new Commission also wants to be able to use sanctions when other powers, such as the US, adopt illegal trade measures while simultaneously blocking the World Trade Organization’s dispute settlement process. The Commission treats trade as a “strategic asset for Europe” – an approach that should help the EU upgrade its “strategic sovereignty” (the term my ECFR colleagues use to describe the bloc’s capacity to act in the global power game).

But securing support from national governments and European citizens will be a challenge. The main problem in this is that Europeans do not seem to have recognised or accepted the EU’s exclusive authority over trade policy.

In most member states, a clear majority of voters say that their national governments would do a better job than the EU in representing their country’s interests in international trade negotiations – as my colleague Susi Dennison explains in “Give the people what they want”. Just 12 percent of French and German voters believe that the EU is best placed to do so. Unsurprisingly, supporters of ruling parties are particularly keen to believe that their national governments would do a better job. This tendency is much stronger in central Europe than anywhere else. Yet the views of La République en Marche voters in France show that national political sympathies do not always prevent Europeans from recognising the EU’s competence in trade. 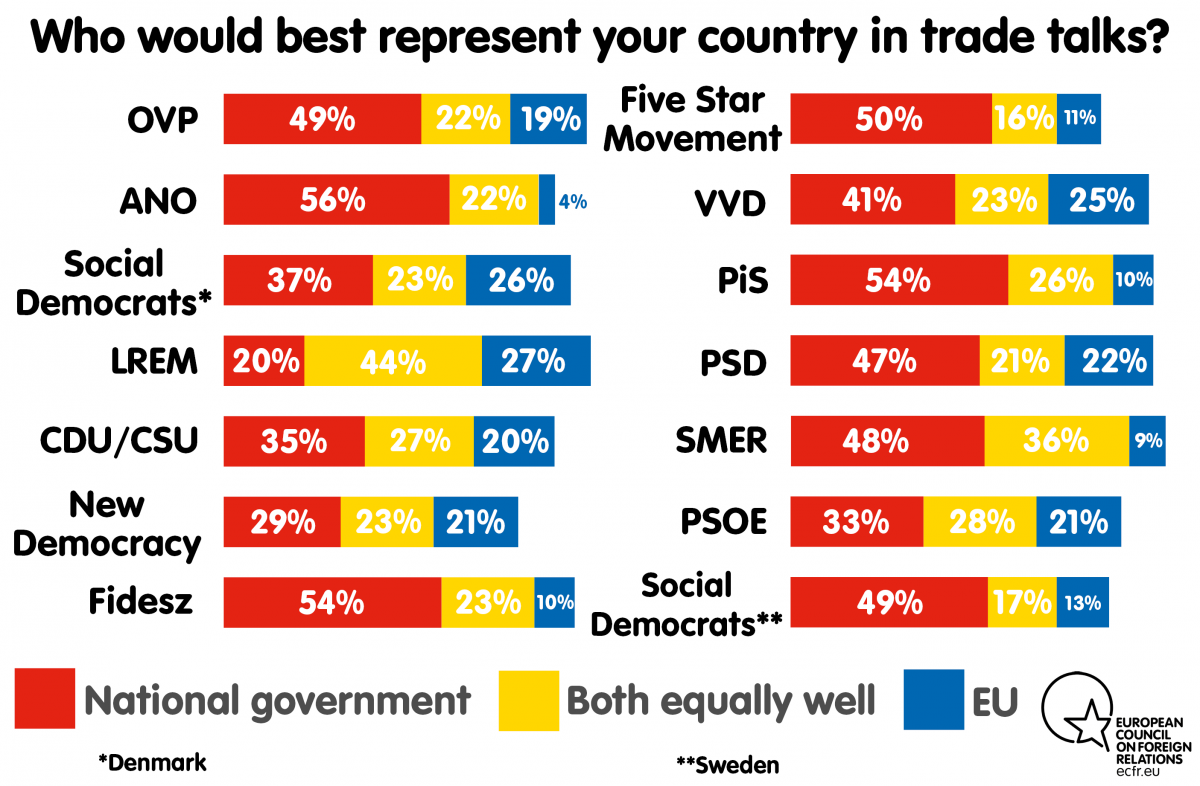 Similarly, few Europeans believe that their country’s economic interests vis-à-vis China are well protected. But they do not necessarily expect the EU to help on this front. Only in Austria, Denmark, France, the Netherlands, and Spain do a majority of voters expect the bloc – rather than their country – to do more on trade. The expectation that national governments should do more is particularly strong in Greece, Italy, and Romania. Of course, these views may reflect a belief that national governments are better placed to tackle an economic threat from China or a tendency to blame national governments for a perceived lack of protection from the Asian superpower.

Nonetheless, voters’ relatively low expectations of the EU are telling. Hogan is set for an uphill struggle.

Efforts to make trade too central to the EU’s global strategy may meet with resistance from some capitals – particularly when they have conflicting loyalties, such as those between Europe and the US. This seems to be the case for Poland. The country’s government used to be among the strongest supporters of the GAFA (Google, Apple, Facebook, and Amazon) tax, but recently gave up on the idea under pressure from Washington. As US Vice President Mike Pence said during his visit in Warsaw earlier this month, “the United States is … deeply grateful that you rejected proposals for a digital service tax, which would have hampered trade between our two nations”. While the Polish government is – on the face of it – in favour of strengthening the EU’s economic sovereignty, it is easy to imagine that it will change its mind once the European Commission takes measures that increase the likelihood of a clash with the US. And, to be sure, Poland might not be alone in resisting such activity. The governments of Hungary or Greece, for example, could face a similar dilemma, given their good relationships with China.

Due to public perceptions that trade should largely be the business of national governments, member states might feel entitled to obstruct the Commission’s work in the area. French President Emmanuel Macron demonstrated what this could mean in practice when he threatened to kill off the EU’s trade agreement with Mercosur over what he saw as a violation of it by his Brazilian counterpart, Jair Bolsonaro. Ultimately, this threat might have proved useful in persuading Bolsonaro to step up his attempts to fight fires in the Amazonian rainforest. But it has also reinforced the impression that national governments can treat the EU’s trade agreements as bargaining chips. At the same time, rather than alleviating French voters’ concerns about the deal, Macron may have inadvertently reaffirmed their belief that the EU should not ratify it.

Indeed, there is a risk of another popular backlash against trade. To avoid this, von der Leyen has tasked Hogan with maintaining the highest possible levels of transparency and communication on trade issues. She has promised that the EU will provisionally apply trade agreements only after the European Parliament has given its consent for this. A newly appointed chief trade enforcement officer will be responsible for implementing the climate, environmental, and labour protections enshrined in the EU’s trade agreements. Apart from making trade more popular, these propositions should clear a path for the Commission’s trade agenda in the European Parliament.

Due to public perceptions that trade should largely be the business of national governments, member states might feel entitled to obstruct the Commission’s work in the area.

Nonetheless, some controversy in the European Parliament seems unavoidable – particularly given the political fragmentation of the body. Von der Leyen’s ambitions to negotiate a trade agreement with the US could easily reignite European disagreements over TTIP. And some MEPs may denounce the EU’s attempts to introduce new environmental measures into its trade policy as pure window dressing or “green-washing”.

Hogan, an old hand in Brussels politics, doubtlessly has the capacity to navigate this rough sea. The more pressing question concerns whether von der Leyen’s Commission can defend its trade competencies from the ambitions of national governments, given the need to simultaneously resist the populist wave in Europe. It also remains to be seen whether the Commission can take action on trade which it believes would benefit the European economy, even if it is initially unpopular. Asserting the EU’s strategic sovereignty – and, ultimately, meeting voters’ high expectations – may demand from the new team not just ingenuity and capacity to build coalitions. but also a good dose of endurance.