Europeans live better than ever before; yet they feel confused and perplexed. New research from ECFR reveals that their children’s futures are the focus of their fears. This anxiety combines both existential and cultural fear, as Europeans ask themselves whether their children will enjoy decent lives lived in a setting of peace. These are understandable human considerations. If they want to represent and lead their voters, European politicians must respond.

The current setting for addressing these concerns makes this challenging, however. For several decades Europeans shared a deep conviction that living together in peace and progress would mean living in a system of democracy, rule of law, and respect for human rights – all part of a consensus that emerged from the world wars of the twentieth century. Eastern European societies unanimously signed up to these principles after 1989. In recent decades, however, anti-establishment parties have questioned the liberal values of Europe, deploying strong anti-immigrant or anti-Roma narratives. The last few years have seen these parties entering government while openly questioning the basics of European democracy.

These profound changes will show through in the European Parliament election result in a few days’ time: anti-European parties will reach a critical mass and are set to exert greater influence over decisions in Brussels than ever before. These parties will likely ally together with the aim of changing Europe’s future trajectory. The big European consensus on how we want to live together is long gone. At stake now is whether the EU may even accept that some of its member states will not govern according to similar standards.

If it did, could the EU function and even continue to exist if its members no longer uphold the same principles? In Hungary, the dominant Eurosceptic government party does not believe that the fundamental values of 1989 are valid reference points for the future. The history of the last few years here shows that a government can cultivate widespread support for strong chieftain style of governing rather than one that respects democratic and institutional boundaries. In response to this, the European Commission eventually opened Article 7 proceedings earlier this year.

But the question cannot be only one about institutions and procedures, important as these are. Political leaders need to mount and win a political argument, too.

The Hungarian government is a case in point, and one which will increasingly apply across Europe. It has been demonstrating its mastery of fear-mongering since 2015. Its modus operandi is to amplify perceived threats about Muslim migrants and combine them with dire warnings about demographic decline. It ties the whole package neatly together in a narrative of distrust about Europe’s alleged failure to act on migration. All of these assertions are laced with a strong nationalistic rhetoric and have influenced voters into believing that only Viktor Orban is able to ‘save Europe’.

The question cannot be only one about institutions and procedures: political leaders need to mount a political argument.

Indeed, ECFR’s findings show that 20 percent of people in Hungary believe that migration is the biggest threat to Europe. But among Fidesz supporters this proportion rises dramatically to 45 percent. Despite there being virtually no migrants in Hungary, Slovakia, and the Czech Republic, politicians here have turned the migration problem into the key political story, mobilising people’s fears. It has worked because this manufactured threat resonates with their own existential questions around their fragile national identity and precarious social status.

Political parties that, in contrast, believe the challenges that European society is facing can only be managed by parties, institutions, and social groups working together need to take urgent action. They will need to set out their political alternative to the burgeoning anti-European forces. In the coming years they need to reflect people’s legitimate fears, and demonstrate that they can respond effectively. This is how they can explain the raison d’être of a united Europe in the 21st century.

ECFR’s research shows that in most European countries the younger generation believes an outbreak of conflict in Europe is likely within the next decade. This may push them into a rationale for war. But this may also mean that younger voters view society in a more realistic way. They see a Europe of great opportunities but with serious challenges and deep social divisions. Pro-European leaders need to mobilise these ‘reluctant warriors’, who are worried but want to preserve a rules-based way of doing things. 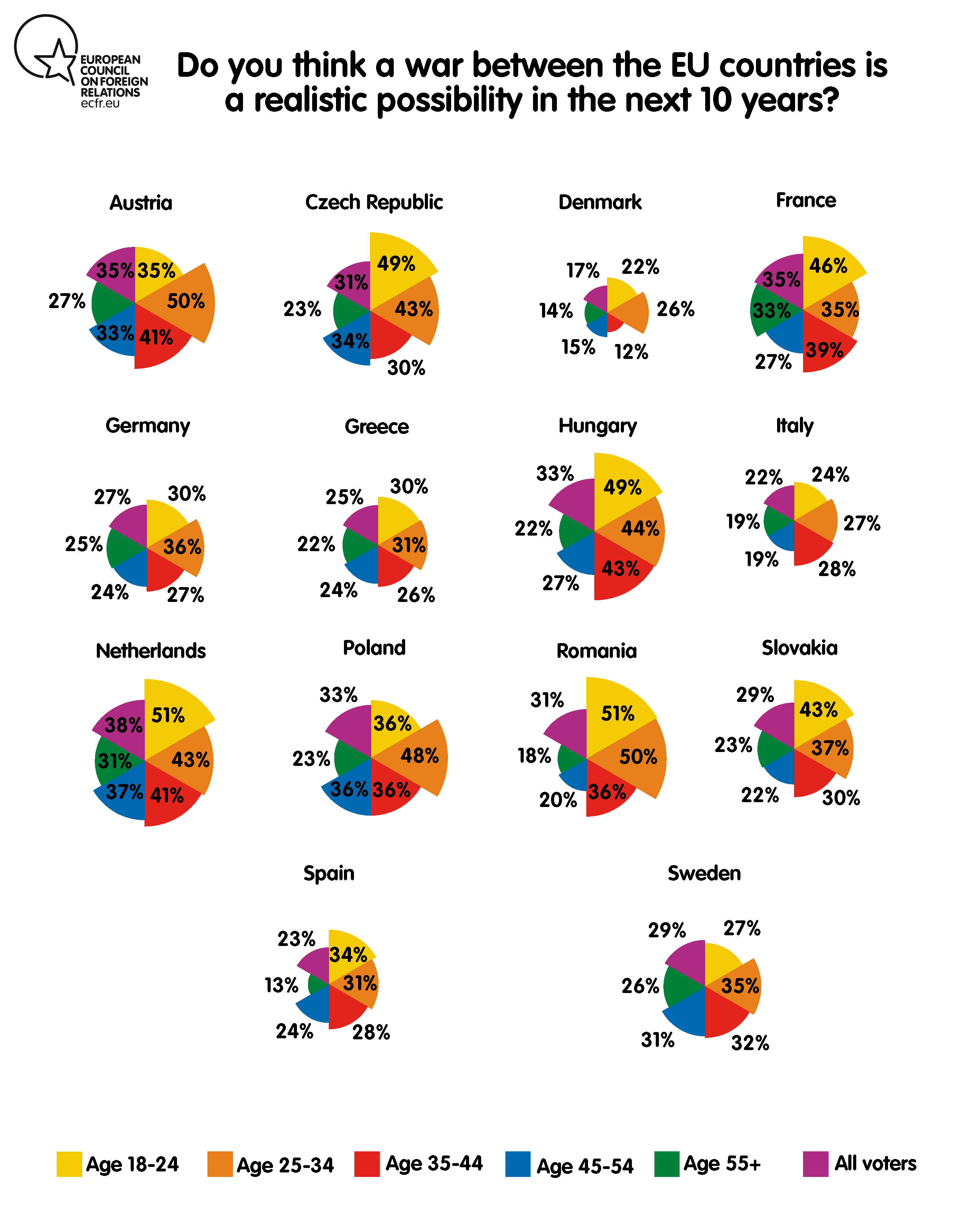 Paying careful attention to this research will guide these politicians to the potential pro-European majority that exists among the electorate. Politics is the art of explaining how we want to live together in the future; and the hints are already there: creating a sustainable economy, addressing climate change, and improving healthcare. People worry deeply about these very real problems. Pro-European politicians need to manage fears and change. Their task now will be to thread these issues into a new political narrative in a way that resonates people’ valid fears.

In order to succeed, cross-party alliances within, and between, countries will be necessary. Political parties do not need to – and should not – pretend that different political traditions are all in agreement. What they must agree on, though, is that Europeans want to live in a society governed by rules. Anti-Europeans parties threaten to take this away – so the pro-Europeans should unite in opposing this, and bring the people along with them. This is what political leadership requires in the next few years.

About the author: Zsuzsanna Szelényi is a ERSTE Stiftung Fellow at the Institute for Human Sciences, Europe's Futures Programme, Vienna.