From the beginnings of integration in Europe, the Netherlands and its two Benelux neighbours (Belgium and Luxembourg) have played an important role in shaping the European Union. They established the interplay with large member states and worked to build a union that privileges the smaller countries so as to compensate for the asymmetries in size, weight, and power among member states. It was also these three member states that insisted on nourishing and building EU institutions in order to strengthen the supranational character of the EU. And Benelux prime ministers and foreign ministers have been indispensable brokers of compromise between Germany and France, between the centre and the periphery, and between northern and southern Europe.

Of the three, the Netherlands has the largest economy and the biggest population. Moreover, the Dutch have strongly favoured open markets and international competitiveness while also emphasising social security and equality. Though clearly committed to building deep integration, the Netherlands has built a close relationship with the United Kingdom and has also made active use of its membership in NATO.

This new institutional environment provides less opportunity for the Dutch prime minister to shape policy outcomes by brokering between parties or by shaping political initiatives. Occasions such as the drafting of the agreement on refugees between Turkey and the EU do not happen often. Here, The Hague was acting in close cooperation with Berlin and the European Commission to define EU policy, effectively using the management role of the rotating presidency. By and large, however, the impact of the smaller member states, even of those with long experience and a proven record, has decreased in the XXL-EU, given its much higher degree of political fragmentation. Contrary to the assumption made by many observers, European enlargement by a high number of mostly smaller states did not increase the weight of small states within the EU, but rather, helped to reduce it.

Even so, smaller member states in the EU still have potential – but this potential is not used or called on in the way that it could be. And there is no better example of that in the EU 28 than the Netherlands. The findings of ECFR’s survey conducted in summer 2015 of foreign and EU policy professionals from governments and think tanks demonstrate the substantial resources on which Dutch EU policy can build. 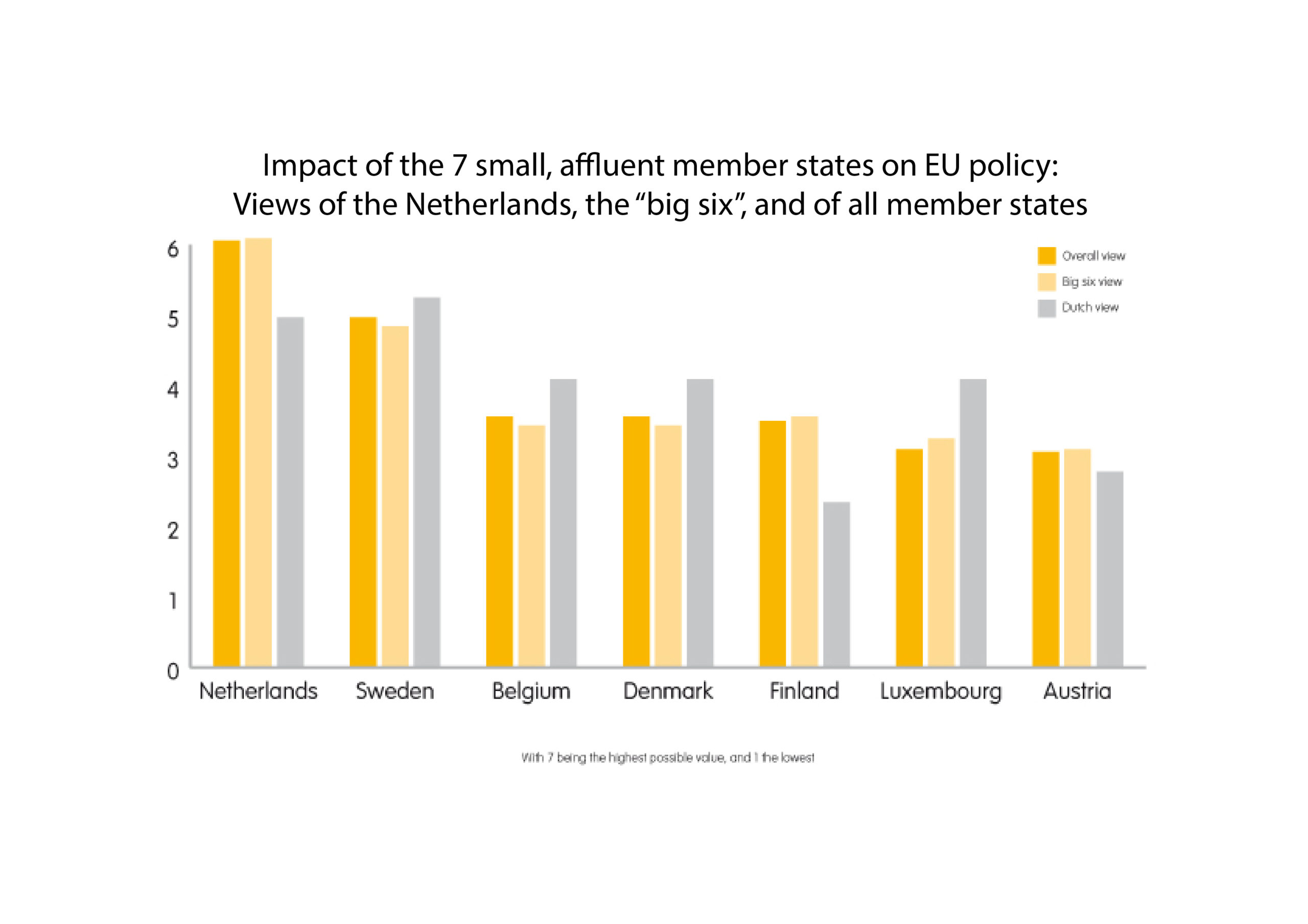 The experts surveyed by ECFR see the Netherlands as the most influential of the affluent smaller member states: a group of seven countries consisting of the three Nordic EU members (Finland, Sweden, and Denmark), the Benelux countries, and Austria. Over 50 percent of the respondents rank the Netherlands as the most influential of the seven, and more than 75 percent rank it either first or second. Respondents from the six largest member states agree with this assessment. In comparison, Belgium is placed in rank 1 through 4 by half of the total respondents, while the other half place Belgium in ranks 5 through 7. Thus, consensus on the leading role of the Netherlands is strong, whereas views on Belgium’s role vary greatly. The Dutch respondents take a more critical view of the role of their own country within this group, ranking the Netherlands second behind Sweden. They tend to consider the impact of the affluent smaller countries as being greater than the respondents from other countries do, with the exception of those from Finland. 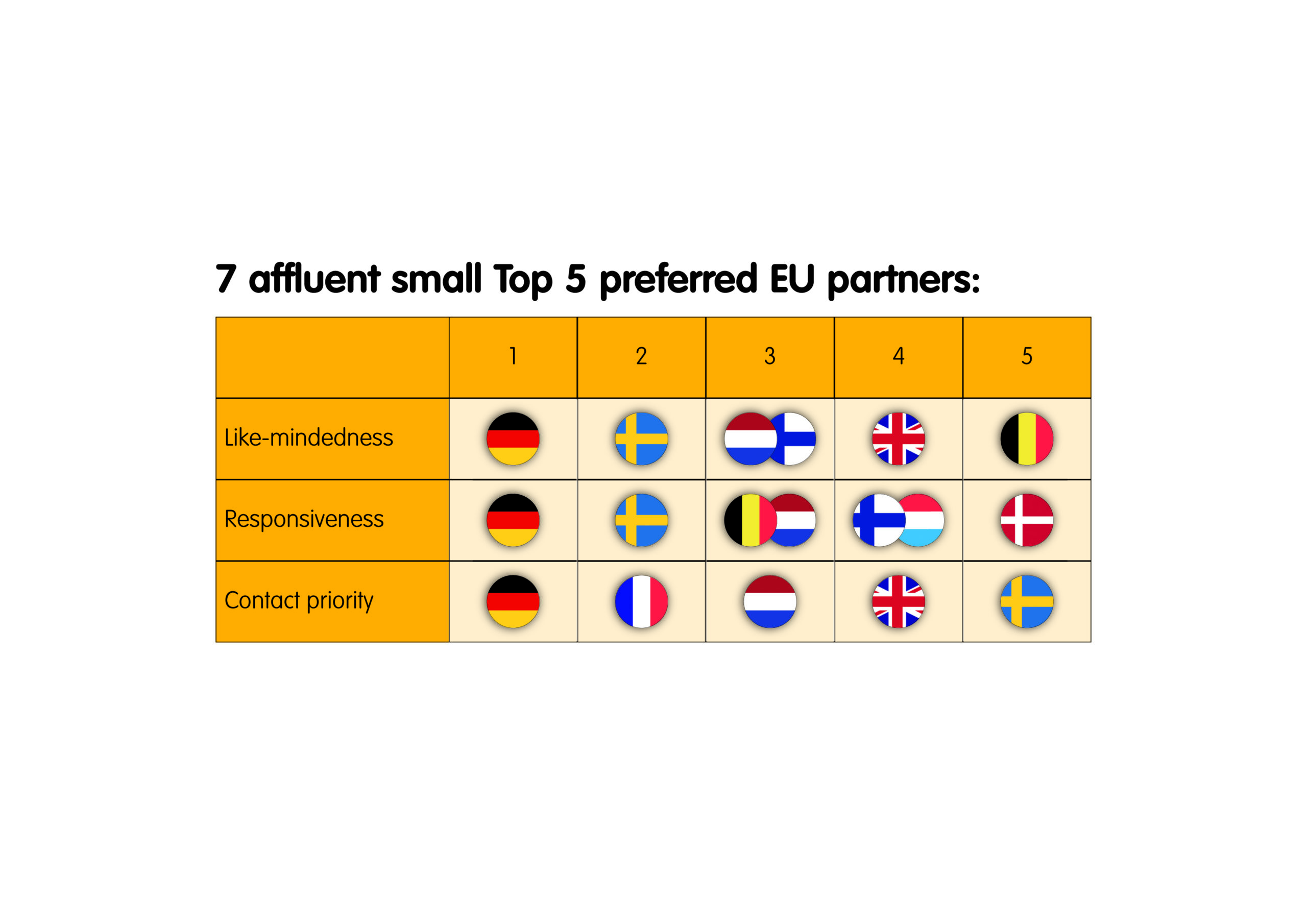 The Dutch role within the EU also builds on considerable “transaction power”, which derives from the Netherlands’ strong reputation as a like-minded country that is responsive and easy to work with. The Netherlands is third on the list of countries that all respondents considered like-minded, after Germany and France; it is top of the leader board among the German political class, followed by Austria and then France; and it is placed second in like-mindedness among the Nordic countries. On responsiveness, the Netherlands (26 percent) and Sweden (23 percent) receive the highest marks after Germany (39 percent). Among the EU member states contacted first or most often, Germany and France are in the lead, but outside the group of the large members, the Netherlands and Sweden are named as most important. Respondents from Belgium and Luxembourg said that the Netherlands would be contacted before their countries reached out to Germany and France. 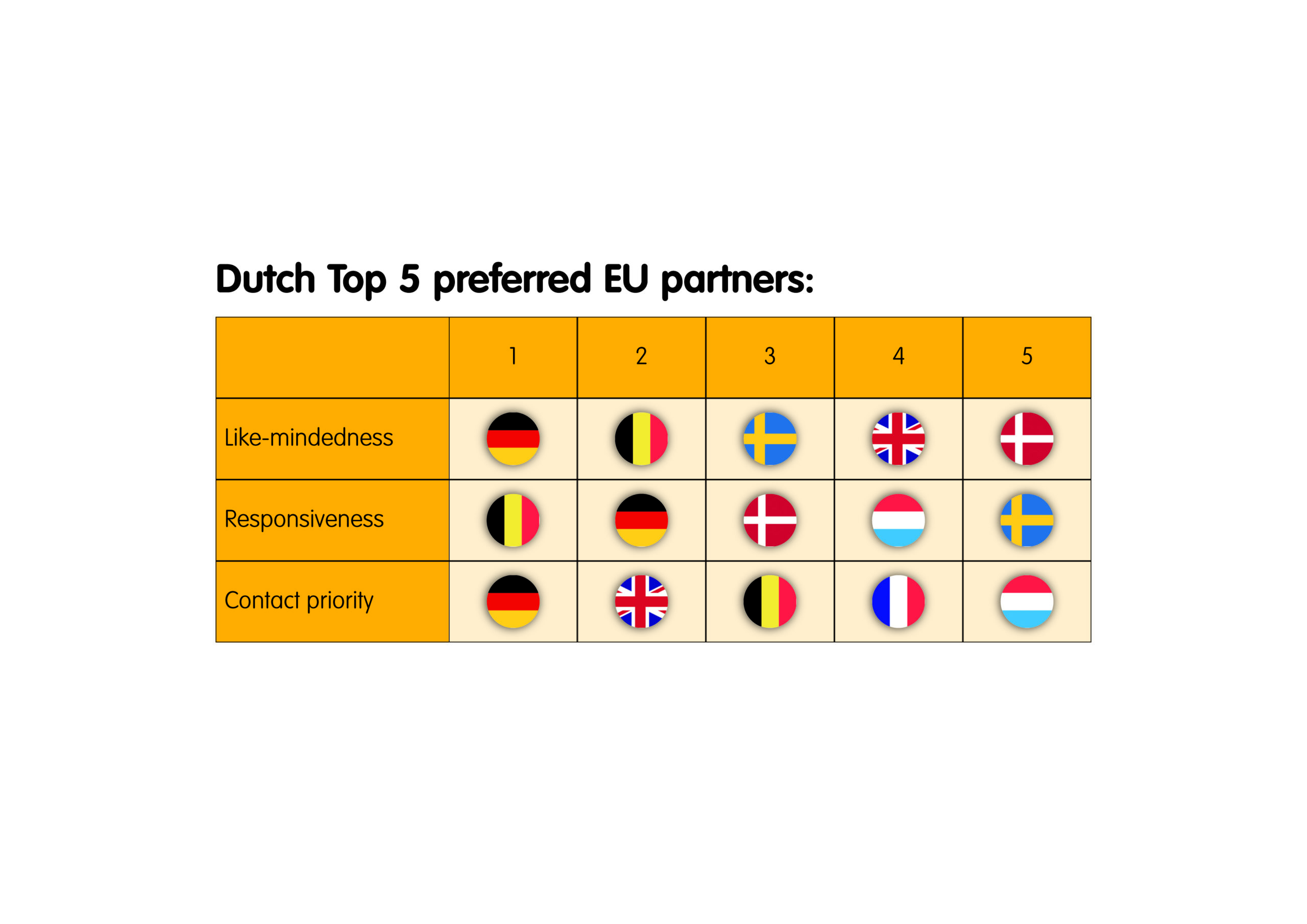 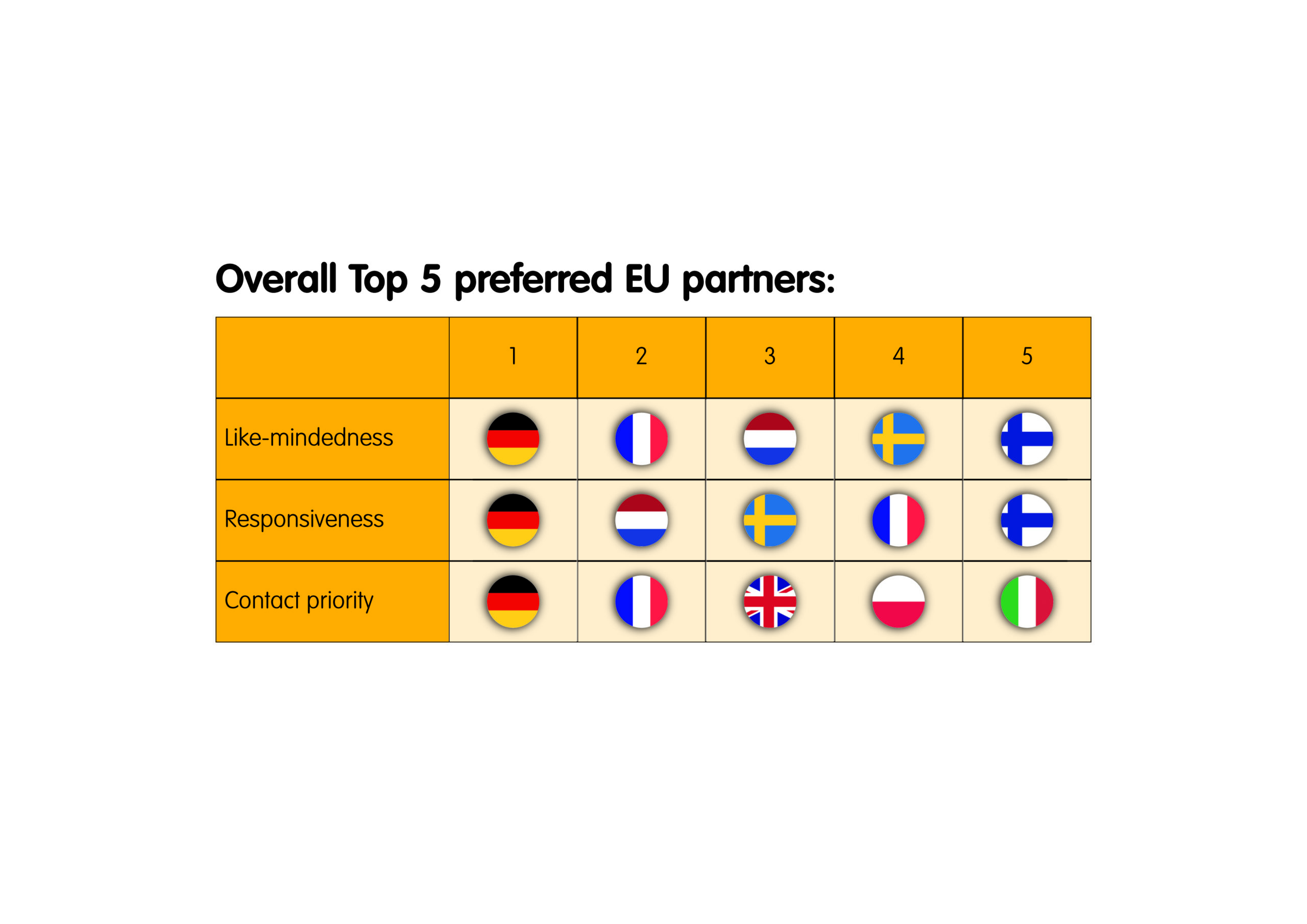 Clearly, the Dutch networks are strong in the north and west of the old EU, but the overall reputation of the country resonates in all regions. Germany and Belgium seem to be most central for Dutch policy professionals, with Britain and Sweden also featuring prominently. On the other hand, the Netherlands hardly shows up in the lists of the Polish, the Italian, and the Spanish respondents.

In a strategy to form a political centre for the EU – a group of countries willing to drive EU policy – the Netherlands would be an important player because of its reputation and its strong links with Germany, the Benelux countries, and the north. If the UK remains a member of the EU, The Hague will continue to be one of the anchors for London, next to Stockholm and Berlin. If Britain leaves, the Dutch will become even more important for Germany and Scandinavia. Much will depend on how Dutch politics plays out over the coming year. The current government of Mark Rutte appears conscious of the Netherlands’ role and links within the EU, but general elections are less than a year away. In recent elections, the party system has been shaken by major shifts in the results for established parties, and it looks like the coming elections could continue that, bringing back Geert Wilders’ right-wing Party for Freedom (PVV) and punishing the liberals of Rutte’s People’s Party for Freedom and Democracy (VVD) as well as the social democratic Labour Party (PvdA). The defeat of the government in the referendum on the EU-Ukraine Association Agreement in April proved that European issues have become subordinate to the domestic political struggle. Should this trend be confirmed in the elections, the prospects for the Netherlands playing a strong role in EU coalition-building are bleak.

Data referred to here was gathered as part of the Rethink:Europe project, an initiative of ECFR, supported by Stiftung Mercator. To assess the interaction between EU member states, ECFR conducted its own EU-wide elite survey among foreign and European policy professionals in governments, think tanks, research institutions, and specialised media, collecting data between May and August of 2015. The Dutch sample consisted of ten participants: seven civil servants from the government side and three participants from think tanks and research institutions. Aggregate data was made available to participants in autumn 2015; full data and analyses will be published alongside the second call of the survey in summer 2016.