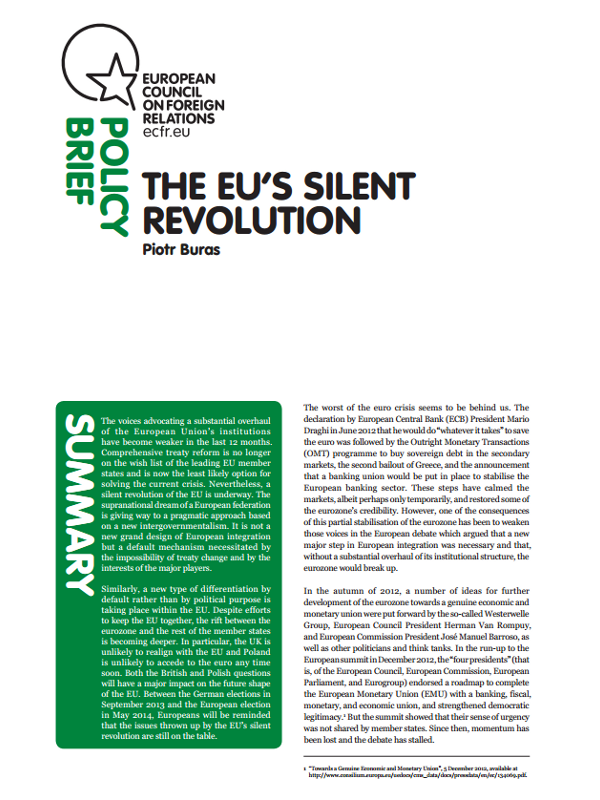 The worst in the euro crisis seems to be behind us. One  of the consequences of the partial stabilisation of the eurozone has been to weaken those voices in the European debate who argued that without a substantial overhaul of its institutional structure, the eurozone would break up. After the December 2012 summit the EU seemed to lost momentum for a major institutional reform.

However, despite the lack of a strategic vision and the decreasing interest in a great leap forward in European integration a “silent revolution” in the EU political system is already taking place. And it will be paradoxically accelerated by the impossibility of major treaty change and other factors.

This revolution is not based on any grand design. Rather, incremental reforms taken on an ad hoc basis are creating a hybrid system of supranational technocracy combined with an increasingly intergovernmental mode of integration and deepening the separation between the eurozone and the rest of the EU.

For a number of reasons, treaty change very unlikely in the foreseeable future. Given the growing distrust of the EU institutions, there is no political support for strengthening their supranational grip on the EU member states. Since all 28 member states would need to agree on a new treaty (and some would need to hold a referendum), it seems unlikely to succeed.

The new intergovernmentalism is not only a default mechanism to solve problems in an ad hoc way in the emergency situation in which the eurozone has found itself in the recent years. There is also growing scepticism about the “community method” as the main modus operandi of the EU. Most telling is the shift in Germany’s position. Angela Merkel is against a further transfer of power to the EU institutions. If she has an original vision of Europe, it is not of a revamped, more powerful Commission and European Parliament but a parallel structure that would be suited to better coordinate the policies of those member states who are willing and able to join. According to her biograph Stefan Kornelius, it could be a “union next to the EU, a new conglomerate of nation states […] The countries conclude agreements among themselves and decide how they solve the problems”.

This growing scepticism about the EU’s existing institutions and in particular the European Commission will not stop European integration as such. But together with the impossibility of treaty reform, it will necessitate a different form of integration than in the past. It may still lead to “more Europe”, but it will be a different Europe than imagined by advocates of the “ever closer union”.

In particular, it may lead to the creation of new eurozone institutions that shadow the European Commission and the European Parliament and more horizontal, intergovernmental cooperation among the member states. During the last three years since the crisis began, there has been much discussion about the perceived emergence of a “German Europe”. But at least in institutional terms, the eurozone may more and more resemble the French vision of Europe and its gouvernment economique.

However, differentiated integration has already divided the EU into at least three groups (eurozone, pre-ins and outs) and will most probably be deepened. In other words, what is emerging is differentiation by default rather than by political purpose. These dynamics are largely determined by the tendency towards a stronger institutionalisation of the eurozone, which is becoming the real centre of power in the EU, as well as by the positions and interests of two major political players outside the EMU – Poland and the UK.

Poland is widely expected to join the eurozone soon and its accession would increase the viability and credibility the monetary union. In fact this is too optimistic. It is the distance between Poland and the eurozone – not the prospect of immediate accession – that determines Poland’s current interests and choices. And the given the domestic political situation (the new strength of the eurosceptic party Law and Order), the need for an constitutional amendment and reluctance of the large part of the society and experts to the prospect of eurozone accession, it is unlikely that the country will be able to join in a near future.

Finally, the strategy of avoiding treaty change will probably further alienate the UK. Treaty reform would give the UK leverage to renegotiate the terms of its membership of the EU – which is partly why the appetite for such an exercise is decreasing among other EU member states. But without treaty change, it is unclear how British expectations of a renegotiation could be met so that pro-Europeans could campaign in an in/out referendum for the UK to remain in the EU.

Given the lack of public support for further transfers of power to Brussels and in the face of institutional deadlock, the EU’s silent revolution may be the only way forward for Europe at the moment.

However, while the new intergovernmentalism and differentiation by default solve some problems, they also create new ones and exacerbate old ones – most notably the democratic deficit and the crumbling unity of the EU.

Compared to the two years before, there has been little debate during the last 12 months about Europe’s institutional reinvention. But this quiet period is about to come to an end. Between the German elections in September 2013 and the European Parliament election in May 2014, Europeans will be reminded that the issues thrown up by the euro crisis are still on the table.