José Ignacio Torreblanca (JI): What’s your experience of this crisis and lockdown?

Felipe González (FG): Well, I guess I’m living through it just as the vast majority of people. I have been confined for 18 days now and I think that, except for the key workers who are doing an impressive job, the contribution to be made by the rest of us is just to comply with the lockdown and stay home.

JIT: A great debate has arisen in Spain and other countries about whether this crisis could have been avoided, prevented, anticipated, or mitigated at all… What's your opinion on this?

FG: This is going to be talked over a lot. It is much easier to speculate in retrospect. However, we need to position ourselves right at the time when everything is really happening. Above all, when a critical analysis is needed, we must put ourselves in the shoes of the decision-makers, the ones in charge of the State apparatus leading the operations. If we don't do that, it's impossible to make a sensible assessment of the situation.

JIT: The response given by Spain to this crisis is conditioned by two factors: Spain is a top-to-bottom decentralised State regarding healthcare, as autonomous communities have many competencies in that matter. But Spain is also a bottom-to-top decentralised state, as it is a member of the European Union. How is the State operating in this sandwich-like situation? What is this crisis teaching us about cooperation among our autonomous communities? 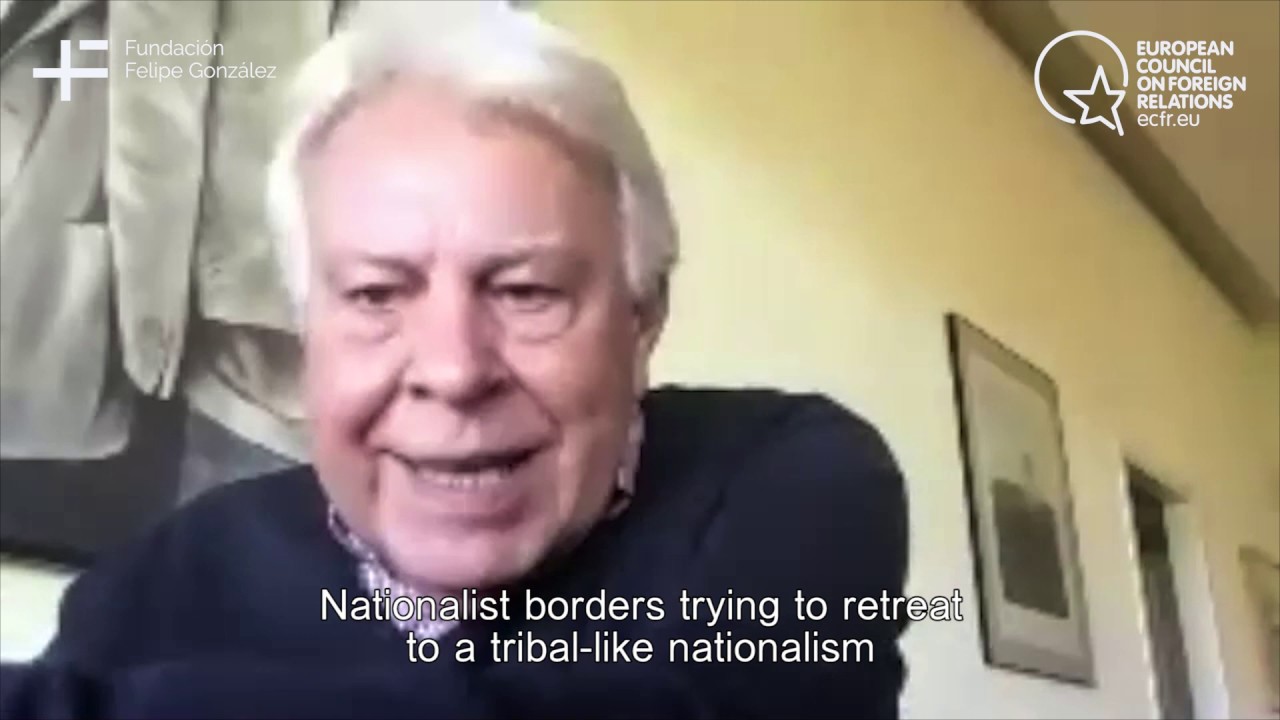 FG: I think cooperation is working just OK downwards. We need to evaluate this on a day-to-day basis and, in the end, a final assessment will have to be made. I think that the action programme, which must be gradually adjusted to reality, is working better than communication. Communication is baffling me to a certain extent, but the action programmes are doing reasonably well in this incredibly uncertain context. The only certitudes in the face of this pandemic are given by scientific input. Scientists are not always certain either, but it turns out that we need to rely on scientific evidence and, at the end of the day, the State needs to respond to that. Spain, as a decentralized State, needs to systematically improve coordination among autonomous communities to operate efficiently. Upward decentralisation towards Europe is failing; downward decentralisation, in my opinion, is quite satisfactory, considering the very tragic situation we are going through. People are distraught. The European Union is failing, not the autonomous communities.

JIT: What else would you ask from the European Union? Would you ask for a more conclusive emergency response, or maybe a better economic and aid response?

FG: I think the response must be comprehensive. The current nationalist withdrawal goes against the historical sense of the European project. That’s a great contradiction: the response to this threat is local, but the threat itself is global. The local response—or national in our case—is quite necessary, but for us, 500 million European citizens—by the way, I proposed European citizenship—this is a local response. Nationalist borders trying to retreat to a tribal-like nationalism take us back many years or decades in time. The European Union was born with the opposite goal: promoting the union among Europeans. And this is failing. We fail to admit that we are all accountable, for the pandemic will reach us all. And we fail to forget that we are the southwestern corner of Eurasia, populated by just 500 million. India declared isolation and 1.4 billion human beings live there. Europe is a small area of our globe; we have plenty of resources and we need to make them available to everyone, both researchers and health workers responding to the health crisis, and to those who are responding to the economic crisis as well.

JIT: And yet, we are seeing a re-emergence of prejudices and stereotypes regarding northern and southern, Protestant and Catholic, thrifty and wasteful countries. This is particularly sad. How do we fight this, how do we get past the screaming and yelling and start working together?

FG: This is not easy to overcome. It is sad, too, because the European Union will indeed be more willing to cooperate when the pandemic reaches the rest of the Union. The most dramatic breaking-up situation we had recently was Brexit: Johnson's attitude as the UK leader was preferring isolation over cooperation; however, he finally admitted that things need to be done otherwise. This evolution will be seen everywhere. There is another problem: we are risking the credibility of the European Union in the eyes of citizens concerning a threat which is much worse than Brexit in its immediate consequences, since it affects a very sensitive thing such as personal health, stirring fears up. This crisis is also more damaging than Brexit regarding an immediate economic impact. The European Union must respond according to its founding principles. We must not forget that the Council of Europe was created to defend democracy, human rights, and the rule of law. Likewise, the European Union had one goal: bringing Europeans together and putting an end to any issues dividing us. Acting together, responding together.

JIT: Do you think we should focus on the Eurobond issue right now or, since there is apparently no agreement at the moment, should we get around this question and explore other ways until we solve that problem? Is this a key issue to put our energies to right now?

FG: In March 2010, I presented an oral report before the European Council that I presented in writing later in May. In that report, I argued for Eurobonds beyond the minimum debt ceiling of 60% provided for in the Pact on Stability. I defended that point then, and I think likewise now, since the scenario is more compelling and dramatic today. Eurobonds are a key instrument. If there are any further tools similarly effective, we should implement those, but we must do so now. We must, at last, admit that extreme austerity, as it was implemented to fight the 2008 crisis, caused a great deal of unnecessary suffering to European citizens and did not provide any relative advantages. Think about how the United States dealt with it: they got out of the crisis earlier than us, and much more efficiently, even though we are a union of countries. All instruments must be available now. And if any country believes itself to be over the rest, they will pay dearly for it. That already happened twice during the 20th century in Europe, with terrible consequences.

JIT: Beyond Europe, our Latin American brothers are going through this crisis with a very different set of policies and approaches. Some of them are implementing measures very similar to ours, and seem quite concerned with the impact on public health and the economy. Others, like Mexico, seem to be in a denial of sorts. What are your views on the Latin American response, and the Mexican situation in particular?

FG: There is no Latin American response, to begin with. It would be quite unexpected if there was one, considering that a body such as the European Union has not been capable of providing an answer, having so many tools at its disposal. I would not stick to Mexico, though. We need to look at Trump's evolution, at what he was saying 15 or 20 days ago and what he says now. We need to take into account his mindset: he is of someone who does not even know what he ignores, and has power too. This leads to the worst kind of nonsense and, therefore, to the worst kind of randomness. Still, a common policy has been agreed between Republicans and Democrats, for the first time in a long time. I would like to see a coordination programme between Latin America and Spain, and much closer cooperation, at least in this stage where we need to fight the virus. This may be reached if foundations and research powerhouses in the industry work together; that is to say, we need cooperation between the public and private sectors. We need a minimum consensus on how to fight this disease and how to overcome its aftereffects. I believe this may be accomplished. Because of my links with Latin America, I am very willing to work on this and make suggestions. However, if we take a look at the evolution of the pandemic around the world, we find governments in denial and governments who do not take responsibility later on. If we criticize what is being done in Spain —and I am leaving aside communication matters—, who should our country be compared to? We got early on top of things. This is, without a doubt, a terrible calamity, but initiatives are being effective. It would be a great step forward if we could achieve a minimum consensus on the package of measures concerning medical treatment and future research on coronavirus.

JIT: Geopolitics comes into play in this whole issue: the ongoing competition between the United States and China, the new Athens and the new Sparta. How is the coronavirus going to affect this big scenario?

JIT: How should political leaders communicate in times of crisis?

FG: Communication must be straightforward, and, as brief, direct and empathetic as possible towards the citizens' state of mind. We must insist on the fact that we depend on the only relative certainty —please, note the emphasis on ‘relative’— which is technical and scientific expertise. However, responsibility is eventually shouldered by the person in charge. This is the so-called “loneliness of power”. The decision-maker has the information, but no one exempts him or her from deciding. Therefore, communication must be austere and direct, and empathise with the people in distress and their feelings, and those who are struggling on the front line.

JIT: You have mentioned in previous interviews the relief of not having a telephone on the bedside table since you are no longer President of the Spanish Government.

FG: The President’s phone is the last phone ringing. It’s a relief not having that phone on the bedside table, but it's also a limitation and immense distress, because it forces me to have a very measured opinion.