With the launch of Ursula von der Leyen’s new European Commission six months after the European Parliament election, one thing is certain: Europe’s politics is no longer boring. The question now is whether, despite its increasing political fragmentation, the EU can become more efficient.

Such fragmentation does not necessarily have to be ominous – as shown by research the European Council on Foreign Relations conducted in early 2019. On the contrary: it can have the useful effect of making the political debate across Europe more pluralist and colourful, as well as more responsive to voters.

At the same time, the new reality requires a broad spectrum of pro-European parties to become more open to compromise with one another. Only in this way can they collectively defend the European project and satisfy the hopes and expectations of the electorate.

Pluralism, together with an unusually high turnout in the May election, reinforced the European Parliament’s position in its struggles with other EU institutions. Mindful of this – and in a clear nod to Europeans behaviour at the ballot box – von der Leyen has put issues such as the Green New Deal and foreign policy high on the new Commission’s agenda. She sought to reduce the gender imbalance within the College of Commissioners. And she promised that new EU trade deals would not be implemented without the European Parliament’s consent.

Meanwhile, European politics has also become more ruthless: three nominees for EU Commission – from France, Hungary, and Romania – were rejected by MEPs following hearings in parliamentary committees. In all three cases, conflicts of interests provided a justification. But the bloodshed also served the purpose of teaching other EU institutions a lesson, signalling the European Parliament’s new self-confidence, and enabling its three largest political groups to settle scores with one another.

The EU needs to develop its rhetoric on the Green New Deal into substantive policies.

In this environment, two challenges, in particular, will show whether the EU’s new leaders, working alongside national governments, have the capacity to give voters what they want. Firstly, the EU needs to develop its rhetoric on the Green New Deal into substantive policies. Secondly, it needs to agree on its financial framework for the coming years. These two challenges are interrelated, as the priority of the EU’s green transition will shape the new budget structure and the calibration of the bloc’s main policies (such as the Common Agricultural Policy and the Cohesion Policy).

Yet member states strongly disagree on the size and the structure of the next budget. And there are significant differences between the main groups in the European Parliament on how ambitious the EU’s green transition should be.

As things stand, a new divide is emerging within the EU. Most countries in the south and the east continue to nurture a vision of the EU as primarily a mechanism for economic convergence between member states. In contrast, those in the west push for the implementation of a new economic model, based on low emissions and new technology, as well as a strong focus on the rule of law as a sine qua non of the bloc’s internal cohesion. As the priorities of the new European Commission seem to be aligned with western member states, it is unclear whether the EU can avoid a new form of divergence. Put another way: it remains to be seen whether the bloc can green and modernise Europe while continuing to close gaps between member states’ economic development.

Pessimists point to the risk of a Hobbesian Brussels in which the three main EU institutions – the European Parliament, the Commission, and the Council – frequently clash with one another, while an equally stormy dynamic shapes relations between the EU’s main political groups and national capitals. Indeed, the European People’s Party (EPP), the Progressive Alliance of Socialists and Democrats, and the Alliance of Liberals and Democrats for Europe have failed, so far, to reach any sort of a coalition agreement, despite intensive talks over the past couple of months. And, after the Greens abstained in the vote for the new Commission last Wednesday, their role vis-à-vis von der Leyen’s team is uncertain.

The 2020 electoral calendar – which features municipal elections in France, and presidential elections in Poland – may force some political groups to privilege national politics over European concerns, making compromises in the EU even more difficult to achieve. A European Parliament that is in disarray and repeatedly clashes with the Commission may only vindicate the bloc’s critics. And increasing divides between member states would make things even worse.

However, recent events suggest that European politics could develop in more encouraging ways. Fragmentation allows for a more flexible Europe, in which policy proposals could – depending on the issue – gain the support of various coalitions of parties in the European Parliament and member states in the Council. The EU’s new pluralism has made public debate more political, as parties and groups have become careful to protect their distinct identities.

This impulse could even lead some groups to remove ill-fitting members from their ranks. For instance, the EPP could eject Fidesz – an outcome that has seemed likely since Donald Tusk’s appointment as the president of the group. If it focuses on climate change, the rule of law, and other topics that are important to voters, the EU can work to convince them that it is not a distant, technocratic and, ultimately, “broken” politico-economic project, as some fear. By early 2019, this sentiment was shared by almost half of the European electorate – according to a poll that ECFR and YouGov carried out in 14 member states as part of a larger project. 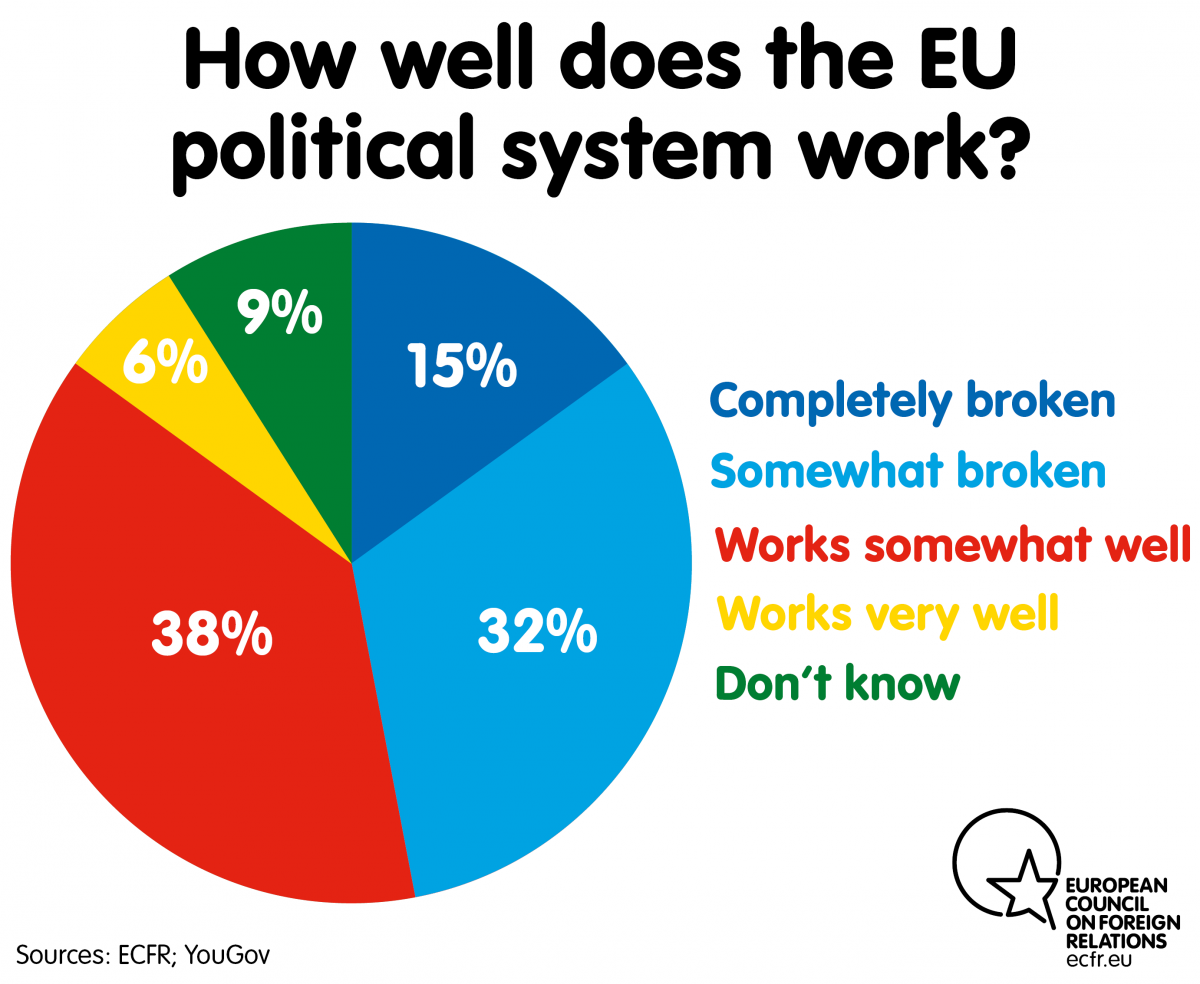 The fact that European voters watch EU political developments closely should prompt leaders to put more effort into agreeing on the required solutions. As such, there are several reasons to believe that, despite the allure of a free-for-all between European factions – and partly thanks to the fact that several fights now seem to be inevitable – the EU could be forced to make substantive progress on a wide array of issues: from green policies and structural funds to the eurozone and the rule of law, to inter-institutional relations and voting rules on foreign policy. The bloc could even reach a new sort of a grand bargain.

Now is the time for leaders in Brussels and national capitals to meet the challenge – by making difficult choices that will affect Europeans’ daily lives, even if these choices are unpopular or seem to go against countries’ narrowly defined interests. And it is time for voters who have rediscovered their taste for politics to accept the responsibility that goes along with this.