The publication of ECFR’s EU Coalition Explorer earlier this month created a minor storm in Slovenia. As the Slovenian media were quick to emphasise, the study ranks the country as one of the four least influential in the European Union, equal with Croatia, Bulgaria, and Malta. This comes at a time when, having endured the turbulence of the Eurozone and migration crises, Slovenia had begun to regain some of its self-confidence.

It is unsurprising that, as a small country outside established EU alliances, Slovenia lacks significant influence. Yet Slovenians’ reaction to the study revealed something about the shared experience of relatively new member states: the stories they tell themselves about their centrality to the European project are often at odds with reality.

Although respondents to the survey – comprising politicians and policy experts in every EU country – generally rank Slovenia in 14th place out of 28 member states in its commitment to European integration, Slovenian respondents rank their country in first place. Meanwhile, Luxembourgian respondents rank Slovenia in second place. This is likely due to progressive former prime minister Miro Cerar’s efforts ties to strengthen Slovenia’s ties with small core member states, which focused on their shared pro-European values and their party affiliations.

The effects of the strategy can also be seen elsewhere: the Benelux countries collectively received 34 percent of Slovenian respondents’ votes for shared interests  (Germany, Slovenia’s key strategic partner, received 17 percent). However, the Cerar government failed to devote sufficient time and resources to the strategy. Relatively inexperienced in EU affairs, the government struggled to deal with the migration crisis after Hungary closed its border in late 2015, leaving Slovenia as the main entry point into the Schengen Area. In an attempt to quell anti-migration sentiment at home and abroad, the government helped close the Western Balkans route. 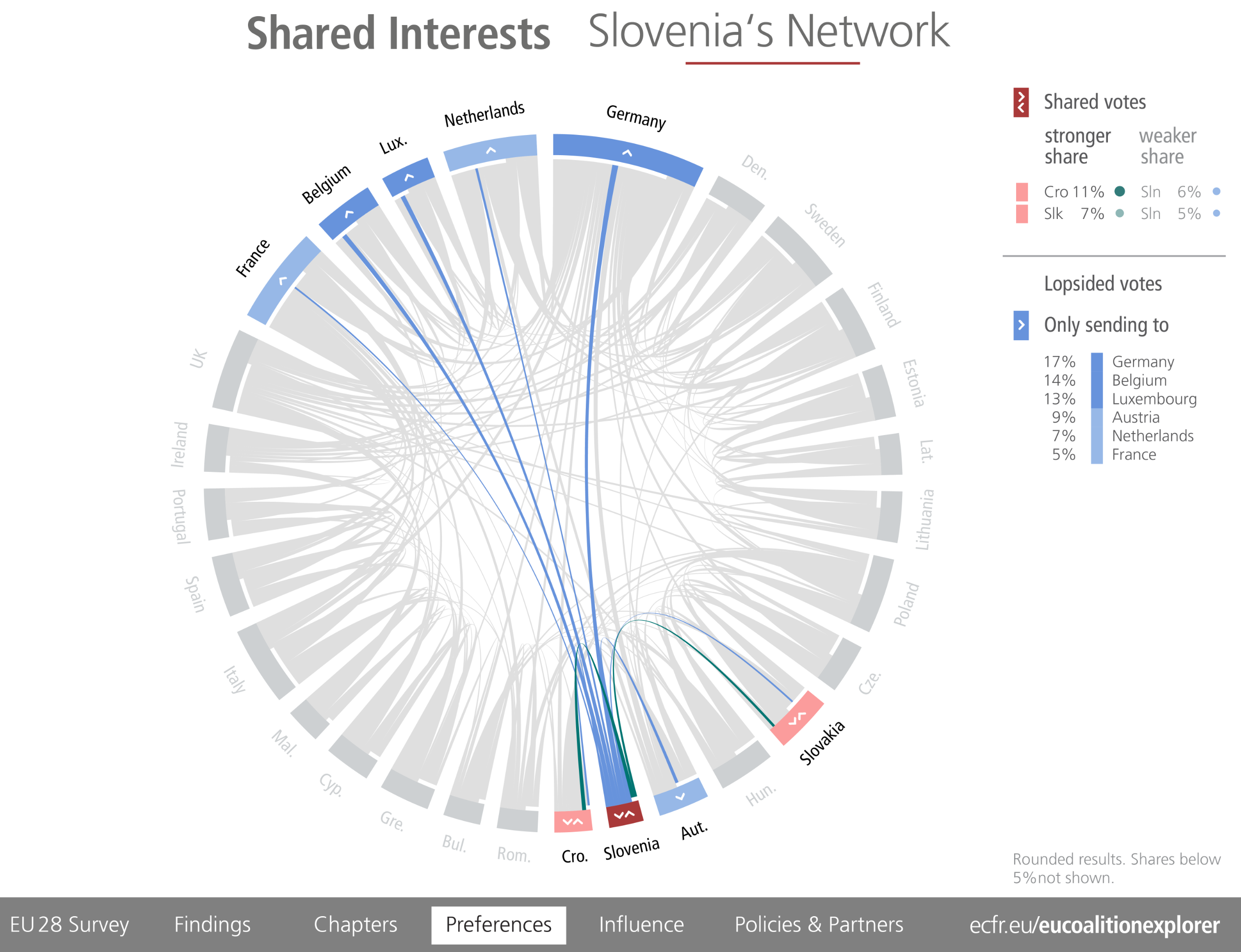 The Cerar government’s pursuit of the strategy reflected its awareness of Slovenia’s lack of influence – even in comparison to the Visegrád group of Poland, Hungary, the Czech Republic, and Slovakia – and its need for strategic alliances. It considered joining the Visegrád group during the Eurozone crisis, but then ruled this out due to illiberal trends in Poland and Hungary. As a result, some observers argue that Slovenia suffered from Greta Garbo syndrome: it had such a high expectation of potential partners that it ended up alone.

Croatia should be a natural partner for Slovenia given their similar backgrounds, geographical location, and interests in regions such as the Western Balkans. Yet Slovenia distanced itself from its neighbours shortly after gaining independence, in an attempt to gain greater recognition from central and western European countries. And, more recently, Slovenia has allowed a fruitless border dispute with Croatia to shape its EU policy. Thus, in ECFR’s survey, 33 percent of Slovenian votes ranked Croatia as the most disappointing member state, while just 6 percent identified Croatia as having shared interests with Slovenia. In Croatian votes for Slovenia, the shares were 24 percent and 11 percent respectively.

The newly elected Slovenian government of Marjan Šarec, a populist centrist, has yet to define its course, but it is likely to be more pragmatic and inward-looking than its predecessor. According to the survey, Slovenia views the Eurozone, migration, and the single market rank as its top priorities. The country is unlikely to block new EU initiatives in these or other areas, but may not be their most energetic supporter either. In developing its strategic relationships within the EU, Slovenia would do well to begin with neighbouring countries, especially Croatia.

About the author: Marko Lovec is a Research Fellow and Assistant Professor in IR at the Faculty of Social Science, University of Ljubljana. He specialises in European politics and politics of the European Union. He has been Associate Researcher at ECFR since the beginning of 2016.