Which are the most like-minded governments in the EU? Which member states are most influential in EU policy-making? Which governments are easy to work with and which have disappointed? What is the future of coalition building in the EU?

These questions have become increasingly significant to EU policy makers as the importance of intergovernmental cooperation has grown over the past decade. At the same time, these questions are rarely openly asked or answered. Government actors certainly have views on such questions but in the political discourse there is no suitable place to exchange these perceptions.

As part of the Rethink: Europe project EU policy professionals in all 28 member states have been invited to participate in an expert survey on these issues. The first series, held between May and July of 2015, gathered input from almost 300 government actors, members of parliament, diplomats, think-tank specialists, and European journalists. The second series will be held between June and September 2016, seeking to attract an even wider participation across the EU.

The data provide fascinating insights into the density of interaction as well as the “chemistry” between EU member states. For the first time, the survey maps the network of contacts between governments and visualises the relative impact of member states in the EU in comparative terms. Most actors and experts on the panel confirm the project’s hypothesis on the rising relevance of coalition building in the EU, but they are not in agreement over the structural implications for the EU and on how far to push integration by caucusing and core group formation.

The graphs below display a sample network view of EU member states based on different factors such as “responsiveness” or “ease of interaction”. Highlighted linkages display the countries naming Germany. 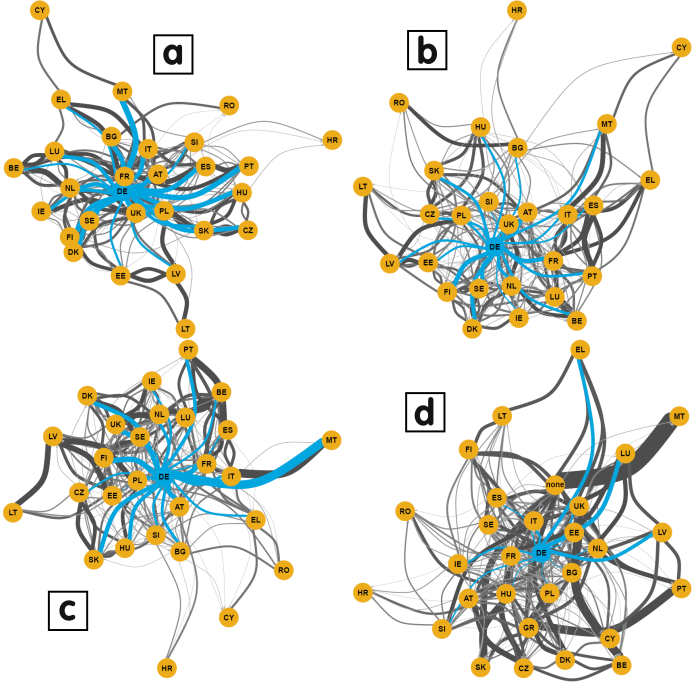 a: On EU matters, which member state government(s) would your government generally contact first and/or most?

b: Which member states generally share many of your country’s interests and preferences on EU policies?

c: In dealing with other member states, which governments have shown to be most responsive or are easiest to work with?

d: Please identify member states which have disappointed your government, because they have not been responsive or have not shown interest in cooperating with your government.

Online you can find analyses on Germany, Poland, Spain, and The Netherlands that provide information on the countries' respective results.

Detailed analysis of the 2015 survey results can be downloaded here as an interactive PDF.

Briefing sessions on our findings and seminars are being offered to government actors and think tanks. To get in touch please contact [email protected]

At the end of June 2016 EU policy professionals, observers, and experts are invited to participate in this year's edition of the EU28 survey.