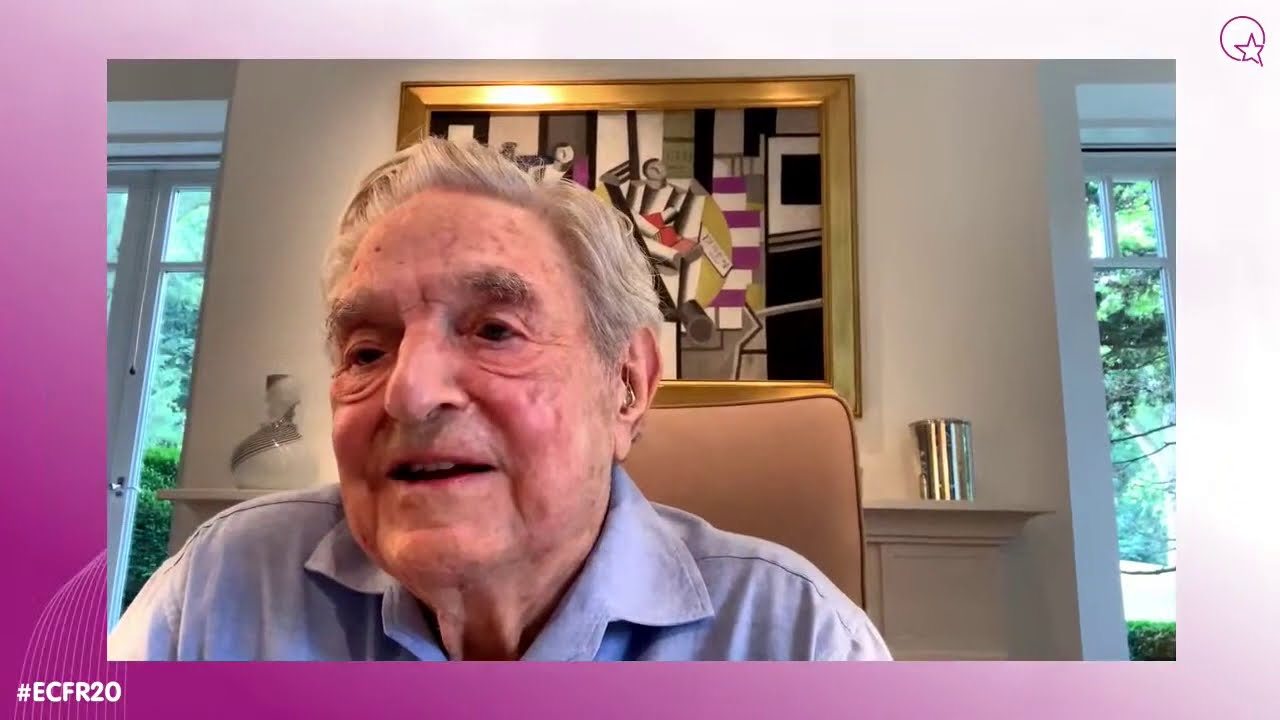 We live at a revolutionary moment in history. At times like these, the range of possibilities is far greater than in normal times. Events that are inconceivable in normal times not only become possible, but actually happen. I have developed an entire conceptual framework, based on the twin pillars of fallibility and reflexivity, to deal with situations like the present. That is what has allowed me to make a fortune in the financial markets.

In the very first days of January of this year I realized that we had entered a global crisis that would change the direction of history. That is when Iranian General Soleimani was assassinated in Iraq. That told me that countries were more interested in fighting each other than in fighting climate change. As you know climate change is a global problem and it requires global cooperation to bring it under control. Then came the novel corona virus that thoroughly disrupted people’s lives, and added yet another global problem.

What direction will history take? That is a question nobody can answer because the future depends on decisions that have not yet been taken. Nevertheless, I believe my Open Society Foundations are well situated to develop strategies to make the world a better place.

I personally have focused on areas where I have expertise and a historical background. That led me to two particular issues that are of global significance.

One is the plan for the International Monetary Fund to issue a new round of Special Drawing Rights and to persuade rich countries to donate their allocations, which they don’t need, to poor countries that are desperate for them.

To explain the idea better, Special Drawing Rights are synthetic money created by the IMF. SDRs are allocated in accordance with the member countries’ shareholding in the IMF. Rich countries don’t need them because they can raise or issue money in their own name in the international markets. The capacity of poor countries to do so is extremely limited. That is why it is so important that rich countries should donate their allocations to poor ones.

As regards historical experience, after the global financial crisis of 2008, I co-operated with Gordon Brown who was Prime Minister of the UK at the time in an issue of SDRs. The rich countries donating their allocations was not part of the scheme at that time. I am working with him now to make it a precondition for a new issue of SDRs.

The second idea is related to the first one but it is specific to the European Union. I refer to my advocacy for the EU to issue perpetual bonds to combat the twin threats of the virus and climate change. Neither perpetual bonds nor SDRs are my ideas; I merely recognized their importance and made them our priority.

The big question is whether they’ll be approved soon enough, because they are sorely needed –SDRs in the developing world and perpetual bonds in Europe. Since I am talking to a European audience, I’ll spend the rest of my time discussing perpetual bonds.

Ursula von der Leyen, started off with a bold idea: the EU should use its AAA rating to borrow money from the financial markets on a much larger scale than ever before. The money would be used to set up a €1 trillion Recovery Fund. In my opinion the amount should have been €2 trillion to cover both the virus and climate change.

Nevertheless, I enthusiastically endorsed the idea and argued that the best and perhaps only way to raise one or two trillion euros is by issuing perpetual bonds.

The distinguishing feature of perpetual bonds is that the principal never has to be repaid, only the annual interest is due. This makes them very efficient.  They have a cost-benefit ratio that is almost ten times greater than that of the long-term bonds that the Commission is proposing to use. This sounds almost unbelievable but it is true.

Assuming 0.5% interest rate, which is quite generous in the current low interest rate environment, €1 trillion would cost only €5 billion annually. The interest would have to be paid forever but the present value of future payments diminishes progressively until it approaches but doesn’t quite reach zero.

Most importantly perpetual bonds could be issued as soon as member states authorize sufficient “own resources” to maintain the AAA rating of the EU. Own resources would come from newly authorized taxes, such as a tax on carbon emissions. The taxes would only have to be authorized; they would not need to be imposed, because that would take too long and speed is of paramount importance.

The perpetual bonds don’t need to be issued in one go, they could be sold in tranches. The first tranches would be snatched up by life insurance companies and other long-term investors who are starved of assets to match their liabilities. As the markets familiarized themselves with the new instrument, other investors would be attracted to it. As the bonds become actively traded the European Central Bank would also be allowed to invest in them.

There is an important distinction between funds raised from the EU’s own resources and those that are contributed by member states. The latter have to be distributed to member states according to their shareholding in the ECB. The former can be given by the Commission to those most in need. That makes all the difference to the effectiveness of the aid that the EU can provide. For instance, it could assist those who have lost their livelihood because of the virus. Currently, they have to depend on their own governments whose capacities vary. It would be much more equitable if the support came from the European Union.

Why did member states ignore so studiously an instrument that is ideally suited to the current situation? They were aware of perpetual bonds because Spain championed them at a virtual summit of the European Council on April 23rd and they were listed as one of the ideas that deserved further consideration.

To avoid confusion I now try to avoid the term perpetual bonds. I prefer to use the word ‘Consols’. That is the name the UK and the US used for centuries to describe perpetual bonds. The UK started in 1752, the US in the 1870s. Interestingly, the Netherlands predated the other two countries. A Dutch water board issued perpetual bonds in 1648 to repair a dike. The bonds are still outstanding but the annual interest has become so small that the general public is not even aware of their continued existence. As far as I know, the Dutch invented the idea; yet today they are its most ardent opponents. They are the leaders of the so-called Frugal Four.

In 1648 the Netherlands faced a serious threat from flooding. Today, the combination of the virus and climate change poses an even greater danger to the European Union. It would be tragic if Europe in general and the Frugal Four in particular failed to give Consols the consideration they deserve.

I recognize that there are bound to be legal objections based on the TFEU that contains all the rules that govern the European Union. I believe the objections could be overcome by arguing that the authors of the TFEU were not aware of the existence of Consols, therefore its regulations don’t apply to them.

I also anticipate moral objections from German speaking people. The German word Schuld has a double meaning: debt and guilt. It follows that debtors should be punished. That makes perpetual bonds that never have to be repaid morally inadmissible.

There is one legitimate objection that people may raise: once you start using Consols you may end up abusing them. But the fact that the large-scale use of the EU’s AAA credit is already designated as a temporary measure. That should ensure that they would not be used in normal times. They offer a financial tool ideally suited to the current situation and they would not be abused in normal times.

So why all this hostility? I believe the answer is to be found in the sequence of events. The Commission was not aware of perpetual bonds when it proposed a recovery plan. It was relying on the only instrument over which it had some control, namely the budget. That focused the attention of member states and interest groups on how the funds are distributed, not on how they were generated. Interested parties are now haggling with each other. For instance, the Frugal Four want to protect their discounts from their contributions to the budget.

It will take time for the authorities to realize that the budget can’t generate the amount of money the EU needs. That’s when Consols will be recognized as an indispensable financial instrument. But by that time it may be too late.

We must therefore accelerate this process. The money is needed now. The German presidency starting July 1st is the ideal occasion for a breakthrough. Chancellor Merkel is focused on making it a great success and she has fully recovered her political influence. She also has capable supporters in the Ministry of Finance who understand the merits of Consols.

In addition to dealing with the virus, Consols should also be used to address climate change. Recently a strong movement has developed to raise the 2030 climate target from 40% to 55%. A number of mainly Eastern European countries are objecting that they don’t have enough money to meet the higher target. This could be readily remedied with an additional €1 trillion of Consols. Of course, the Commission would have to carefully monitor that the funds are not misdirected or misused.

George Soros is a philanthropist and an ECFR Council Member.

We will never send you any content that is not ECFR related. We will store your email address and your personal data in accordance with our privacy notice.

Edge of the Atlantic: Portugal’s presidency of the EU Council

Europe’s post-pandemic strategy for the WHO

Not getting away with murder: How Europeans can shape US-Saudi diplomacy