Largely unimpressed by the criticism it has faced from the ranks of the European Parliament or the European Commission, the Law and Justice-led government in Warsaw appears determined to continue its mission to rebuild the Polish political and legal system according to its own designs. The impact of Poland’s new course will be felt in social policy and the economy. On foreign and security policy, however, it seems that the new leadership has toned down its neo-conservative rhetoric recently. Warsaw is not framing all of its actions in the logic or semantics of a “new cold war” with Russia, it is not insisting on the permanent deployment of NATO combat troops in the East as it did in its initial statements, it is not refusing to engage in dialogue with Russia, nor is it idealising the political situation in Ukraine or ignoring the serious shortfalls and faults of politics in Kyiv.

Since the Law and Justice party came into power, German-Polish relations seem to have suffered from less of a setback than had initially been anticipated by observers. Both sides appear to be mindful of the importance of the relationship and its continued significance for the European policy of both capitals. Berlin certainly does not want to further galvanise anti-German sentiment among the Polish right; and Warsaw is apparently seeking to demonstrate its realism, be it in the preparations of NATO’s Warsaw summit or in its handling of the presidency in the Council of Baltic Sea States.

Analysis of the views among the Polish political class about the role and place of the country in the EU were gathered by ECFR before the elections of October 2015, which brought the Law and Justice Party into power. The emergence of an absolute majority for one party in the Polish parliament for the first time ever – as opposed to the coalitions Polish politicians had previously entered into to form a government – makes this data interesting because it reveals some rather striking differences between the political perspectives among Warsaw’s political class before the elections and the political agenda of the Law and Justice Party after elections.

The data demonstrates how central a role Germany plays for the Polish political class. It is considered by Poles to be among the most-like-minded EU countries, together with Lithuania, Latvia and Sweden. Contrary to the current government’s strong emphasis on Visegrád cooperation, the three other members of that group – the Czech Republic, Slovakia, and Hungary – are at the bottom of Poland’s top ten. In fact, these Visegrád countries sit among the top ten most disappointing EU member states from a Polish perspective. Hungary is second most disappointing, the Czech Republic third, and Slovakia seventh, on par with the United Kingdom. Interestingly, Germany is listed at the bottom of the list as the least disappointing, while France is ranked as the most disappointing– the gap between the two says a lot about the weakness of the “Weimar Triangle”. It could well be Poland’s view of French interest in the triangle is closer to reality than that of Germany, where elites would like to see both partners engaged in a trilateral format with Berlin at its centre. 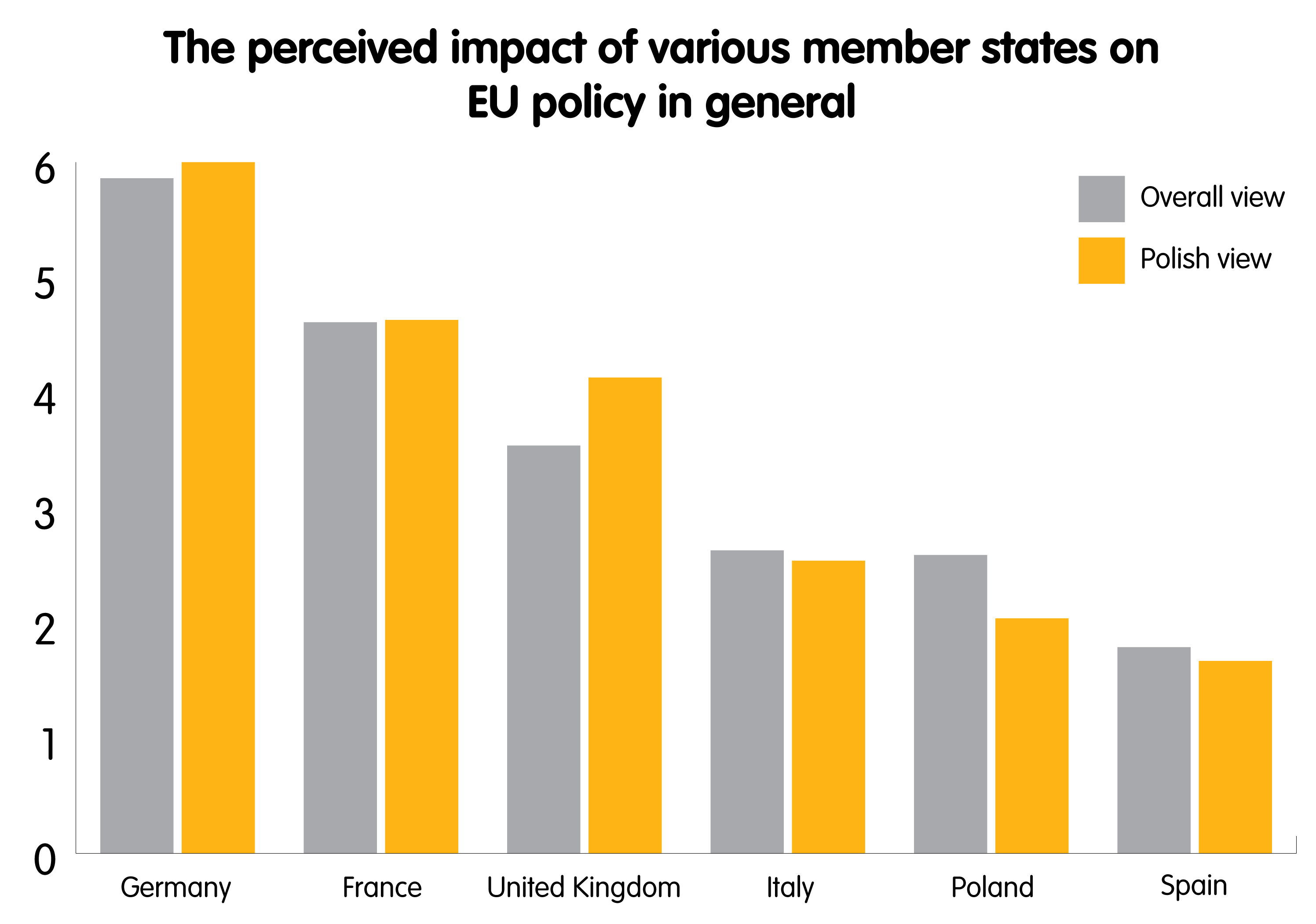 Asked about the most responsive or easiest partner governments to work within the EU, Polish participants put Germany and Sweden first in their top five, followed by Estonia, Latvia and Romania, with no Visegrád partner listed in this category. Twenty-four out of 40 Polish participants named Berlin as the government they would contact first or most regularly, followed by Paris (18), and London (15). Nine participants also listed the Czech Republic and Sweden.

Ever since the preparations for the Nice summit, which took place in 2000, Polish political elites have been conscious of how the country would fit in among the large EU member states like Germany when it was finally admitted to the Union. The survey results serve as an indication of how entrenched Poland’s position now is among the large member states a decade after joining. Poland is ranked fifth out of the six larger countries in terms of its impact on EU affairs in general. In foreign, security and defence policy it surpasses Spain, but with regard to fiscal affairs, Spain is seen as stronger by all participants – even by Polish participants themselves. 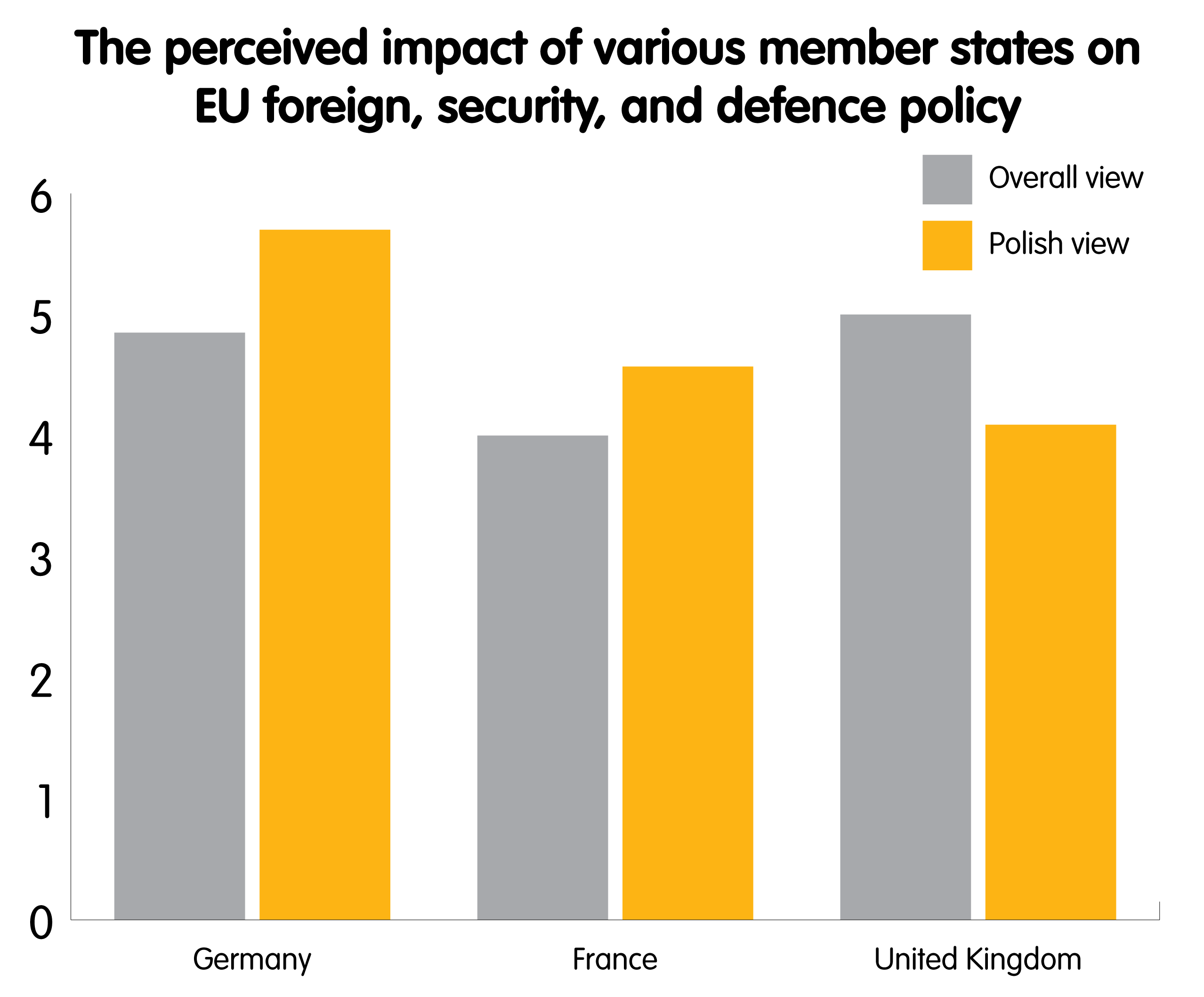 The Polish view differs from the overall view of the political class in the EU in a number of interesting ways. When asked to rank the large member states according to their impact on EU policy in general, the Polish respondents perceive Germany to be slightly stronger and the UK clearly stronger than the overall view, while they believe their own impact to be much more humble than others give them credit for.

The same pattern shows up in Polish responses when looking at the impact on fiscal policy. In terms of foreign, security and defence policy, the Polish view of the six large member states differs significantly from the overall view of the six except for Spain. Germany and Italy are seen as having more impact, while the UK and Poland are seen as less influential. Whereas the overall view ranks Poland fourth on external affairs and defence, the Polish political class sees itself in fifth place.

The assessment of the political classes of the so-called “big three” – France, Germany and the United Kingdom – are particularly relevant for understanding how far Poland is perceived to be a powerful member state. The German view is the most sympathetic, viewing Poland more positively than the other two except on fiscal policy. On EU policy in general or foreign policy, security and defence, the German respondents rate Poland’s impact higher than that of Italy. The French view of Poland’s role differs most strongly on fiscal policy; here the French respondents are very critical with their own country’s role, and they assign greater impact to the UK, Italy and Poland than the other participants. The British view is mostly more critical of Poland than the general view. As with the French respondents, the British participants ranked their own country significantly lower on fiscal policy, in this case ranking Poland somewhat higher than the UK. 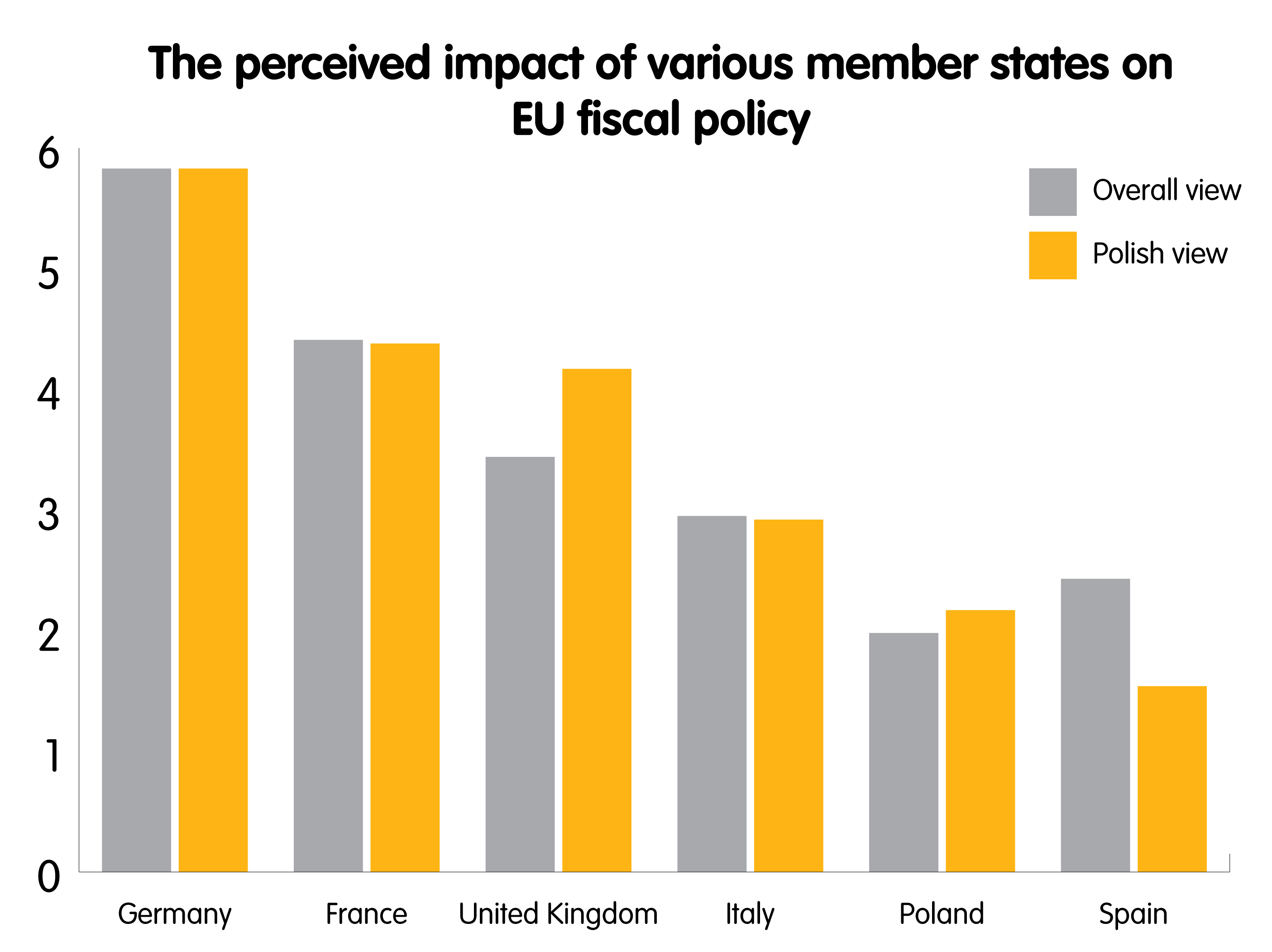 In sum, Poland appears to be firmly anchored among the six large member states of the EU, seen as more important than Spain, and in some respect even challenging the position of Italy as the fourth ranked country among the six. The high marks for Germany in the Polish responses to the survey corresponds to higher marks for Poland from the German respondents compared to the overall view. Neither the Weimar Triangle nor the cooperation among the Visegrád Four appear in very positive terms in Poland – while the former will hardly concern the present Polish government, the latter stands in direct contrast to its stated priorities. The same could be said about relations to the UK, which are not considered as important by the Polish political class.

Ultimately, ECFR’s elite survey suggests that the relationship most relevant for Poland’s role in the EU is that between Warsaw and Berlin. Signals in Berlin suggest that Germany would like to keep Poland close irrespective of the colour of its government. However, it is up to the Poles now to reciprocate. This will require Poland to show more restraint on domestic affairs and maintain a mostly sensible position on EU matters. Should the views among the professional elite prevail over party rhetoric, the outlook for Polish-German relations is rather good. If not, the damage could run deeper in future months and years.

Data referred to here was gathered as part the Rethink:Europe project – an initiative of ECFR, supported by Stiftung Mercator. To assess the interaction between EU member states, ECFR conducted its own EU-wide elite survey among foreign and European policy professionals in government, think-tanks, research institutions and specialised media, collecting data between May and August of 2015. The Polish sample consisted of 40 participants, about half coming from thinks-tanks and research institutions, the other half being split between government/parliament (12) and the media (7). Aggregate data was been made available to participants in the fall of 2015; full data and analyses will be published alongside the second call of the survey in the summer of 2016.