As a small Baltic country with no desire to fall into Moscow’s orbit, Latvia is keenly aware of the benefits of EU membership. The country’s government, political opposition, and society broadly support alignment with the policies of both the European Union and NATO. This is largely because Latvia realises that it has few options – and that a lack of internal unity could damage both the Western alliance’s image and its own. Nonetheless, some Latvian politicians have, as is increasingly common in Europe, begun to favour intergovernmental responses to major European policy challenges.

Latvia is likely to remain a reliable EU partner throughout 2019. Traditionally, the country has experienced low levels of Euroscepticism, with anti-EU sentiment failing to take root in its parliamentary parties. Although Latvians often criticise, and occasional scapegoat, the European Commission, most politicians recognise that such behaviour does not make for a successful electoral strategy. The recent October 2018 national elections confirmed this: none of the seven political parties or hundred MPs elected to the Saeima (parliament) is openly Eurosceptic.

There are two main factors in Latvia’s committed pro-Europeanism. The first is the country’s determination to remain outside the Russian sphere of influence, which has led it to support the EU and NATO for almost 15 years. The ongoing Russian-Ukrainian conflict and Russia’s constant efforts to antagonise the West are deeply worrying for Latvia (as they are for neighbouring Lithuania and Estonia). Thus, aided by its politicians’ continual interactions with their EU and NATO partners, Latvia leans increasingly towards the West.

Latvia’s status as a pro-European country remains essential to its reputation among foreign companies.

Secondly, EU membership has had significant economic benefits for Latvia. Due to an influx of European private and public investment, the country’s GDP per capita has risen from 42 percent to 67 percent of the EU average in the last 14 years. Indeed, Latvia has received more than €10bn from the EU budget (in current prices) since joining the Union. Moreover, European-funded infrastructure projects in the energy and transport sectors – particularly the Baltic Energy Market Interconnection Plan and Rail Baltica – have had visible benefits for Latvians. Hence, the direct economic gains and favourable investment environment that come with EU membership have generated widespread support for the European project. And, in light of ongoing negotiations over the EU’s 2021-2027 Multiannual Financial Framework (MFF), the country is reluctant to disrupt the inflow of EU funding with combative political rhetoric. Similarly, Latvia’s status as a pro-European country remains essential to its reputation among foreign companies – an important consideration amid strong competition for investment in the region and the wider EU.

Against this background, some Latvian politicians’ enthusiasm for intergovernmental politics can be traced back to the European migration crisis that began in 2015. These figures seemed to initially oppose the EU’s 2015 refugee quota plan (which Latvia eventually approved) to rejuvenate their careers. Yet migration continues to be a sensitive issue in the country due to its experiences with forced migration under Soviet rule, which markedly changed its ethnic makeup. Furthermore, due to a historical lack of migration from Africa and the Middle East to Latvia, politicians were able to play upon some Latvians’ fear of the unknown.

Like several eastern European countries, Latvia appears to be experiencing the accession fatigue resulting from adjustments to the many conditions of EU membership. The conditional transposition of the acquis communautaire into Latvian law and the structural challenges the country faced in the run-up to its 2004 accession were demanding. The learning curve remained steep after accession due to ongoing legal, political, economic, and social adjustments to EU norms, with many Latvians perceiving membership as continuing EU (accession) conditionality. In addition, Latvian leaders and ministries often fell short in communicating these responsibilities and the sacrifices they required in national debates on the EU. This left voters with a sense of dissatisfaction with, and exclusion from, the Union’s decision-making processes. Indeed, many Latvians feel that their country is merely bowing to the European Commission’s demands and have no say in their country’s policies. The effects of the financial crisis in 2008-2010 and the resulting austerity the government and the EU imposed on Latvia have reinforced this perception. But it was the initially unpopular introduction of the euro in 2014 and the subsequent migration crisis that have contributed most to support for the intergovernmental approach. 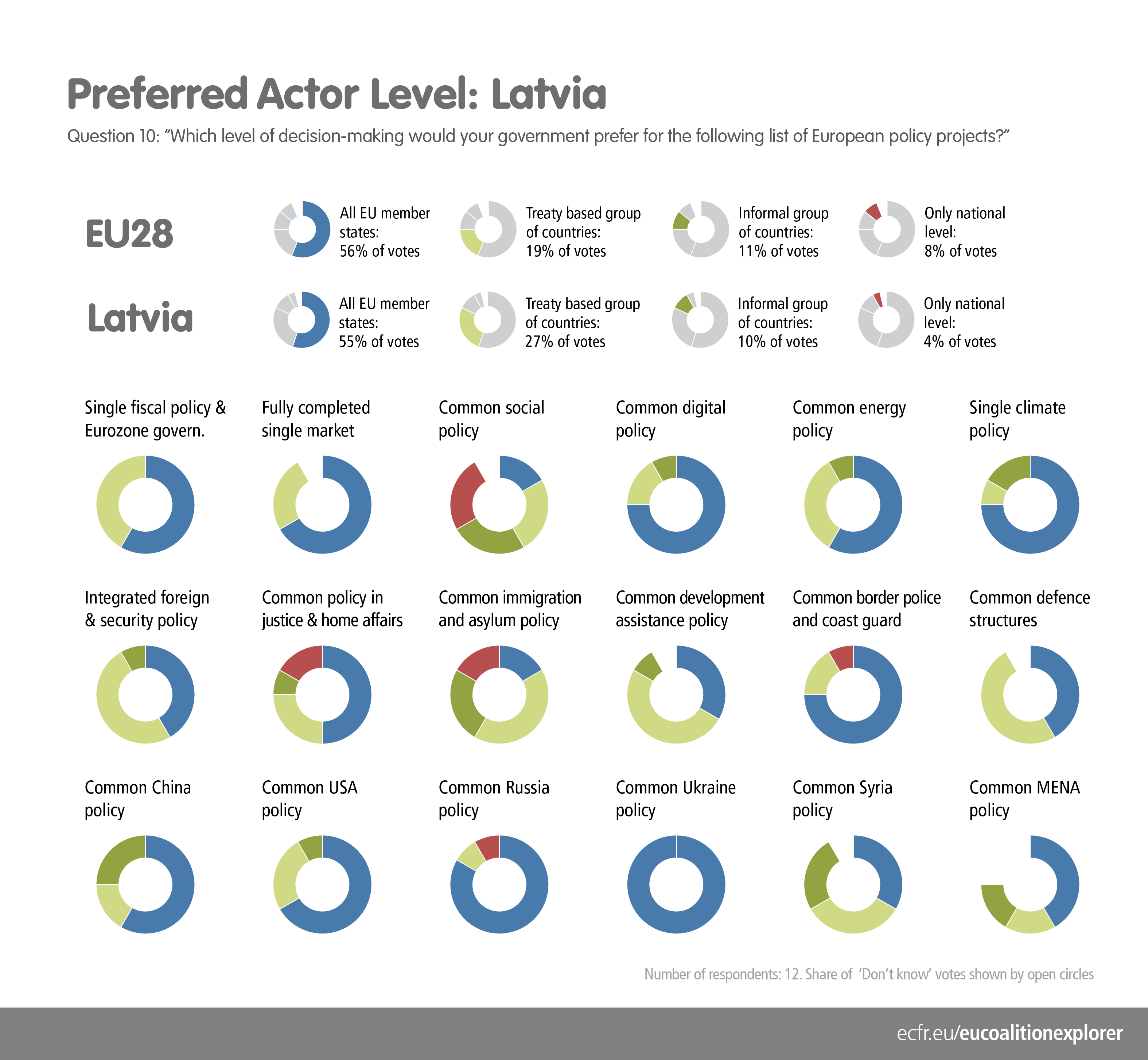 Partly in response to accession fatigue and voters’ increasing demands to be heard on important issues, three of Latvia’s six largest political parties have tended to adopt the Visegrád group’s view that the European Commission should defer to national interests and the subsidiarity principle (according to which issues are dealt with by the lowest-ranking competent authority). Yet the other three support the supranational power of the European Commission. Thus, Latvia is likely to maintain its positive stance on European integration for years to come and to play a constructive, cooperative role in the EU in 2019 – due to its geopolitical and economic interests, as well as its overall sense of belonging to the Western world.

Karlis Bukovskis is deputy director of the Latvian Institute of International Affairs (LIIA). He has been an associate researcher at ECFR since 2017.