On the heels of a botched military coup, and a steady stream of anti-Western soundbites from Turkish leaders, President Tayyip Recep Erdoğan’s meeting with his Russian counterpart Vladimir Putin is likely to raise eyebrows across Europe and the United States.

The two leaders are meeting face to face for the first time since the Turkish army shot down a Russian fighter jet on the Syrian border in late November, leading to a dramatic meltdown in bilateral relations from trade to tourism – and a raft of Russian sanctions that have cost Turkey billions of dollars. The war of attrition between Turkey and Russia lasted only six months, coming to an end with a letter from Erdoğan to Putin in June stressing that, according to the Kremlin, said Turkey “never had the desire or deliberate intention of shooting down the Russian Federation’s plane.”

But relations have been restored faster than they unraveled.  Coming after a tumultuous month in Turkey, Erdoğan’s day trip to Saint Petersburg to meet with his Russian counterpart is a gesture of appreciation to Putin for his immediate disavowal of the 15 July coup and an effort to bring economic ties back to pre-November levels.

The trade volume between the two countries ($25 billion in 2015) has long been in favour of Russia due to its massive energy exports to Turkey. But Russian direct investment in Turkey and Turkish exports to Russia had also soared – thanks in large part to the close personal rapport between Erdoğan and Putin – making Russia Turkey’s second largest export market (after Germany) by 2015. The Turkish tourism industry had also grown dependent on Russian tourism and the loss of nearly 3.5 million Russian travelers per year has devastated Turkey’s coastal towns like Antalya and Alanya. Revitalising mega-projects that were put on hold after the November crisis will also be on the agenda; namely the Russian contract to construct Turkey’s first nuclear power plant (Akkuyu) and the equally ambitious Turkish Stream, which would connect Russian gas supplies to mainland Anatolia under the Black Sea.

Troubled as it may be, Turkey’s relations with its western allies have created structural and economic bonds that are institutional and stretch back for decades.

On the more strategic level, talk of Ankara’s “pivot to Russia” or its departure from the Transatlantic community is, at best, premature. Troubled as it may be, Turkey’s relations with its western allies have created structural and economic bonds that are institutional and stretch back for decades. It would be unfathomable for Turkey to replace NATO with the Shanghai Cooperation Organization or the European Union with the Eurasian Economic Union. Turkey is too deeply entangled in western economies and the Transatlantic security architecture to make such a quick u-turn.

But as long as tensions with United States and the European Union continue, expect a cosier relationship with Moscow and more frequent diplomatic visits. Especially now that the Turkish president has blamed Washington for supporting the coup by harbouring Fethullah Gülen – the 74 year old cleric based in rural Pennsylvania who heads a worldwide movement and is regarded by Turkey as the mastermind of the coup. Turkey’s extradition requests present a legal challenge for the United States and relations are likely to be bumpy as long as the Gülen saga continues.

It is highly unlikely Turkish President Erdoğan will find in Brussels the post-coup solidarity he had been seeking.

Ankara is also upset with the post-coup statements from the European Union, which has criticised the widespread crackdown as a curtailment of democracy. With an accession process leading nowhere, and with the thorny issue of visa-liberalisation — described by Turkey as a condition for continuing the refugee deal with Europe — it is highly unlikely Turkish President Erdoğan will find in Brussels the post-coup solidarity he had been seeking.

Hence the day-trip to Saint Petersburg –and all its symbolism.

Turkish-Russian ties have thrived in the Erdoğan period thanks in large part to the stability of leadership in both countries. In December 2004, Putin was the first Russian head of state to visit Ankara since the Russian and Ottoman empires – historic foes – established relations in the fifteenth century. Since then, there have been dozens of visits and bilateral meetings. Erdoğan and Putin have developed a comfortable personal relationship and ushered in a period of joint economic growth. The two leaders share many traits, including a highly personalised style of governance, deep suspicions about the West and a cult of machismo that has defined domestic politics in both countries. In 2013, Erdoğan’s economic advisor Yiğit Bulut famously said, “There is a leadership problem in the world. I say this everywhere. There are only 2.5 leaders around the world today. Mr. Erdoğan, Mr. Putin and the half is Obama.”

But Turkey’s newfound love for Russia is not without problems. There is the issue of Syria, where Turkey’s support for the Sunni opposition and Moscow’s backing of the Assad regime pushed the two countries into a proxy war for much of 2015, culminating in the downing of the plane in November. Turkey has since moderated its stance towards Damascus, no longer calls for Assad’s departure, and is supportive of a transition process for a peace deal in Syria.

But Ankara has not abandoned its support for Sunni opposition groups in the north of the country, both as political leverage in the Syrian equation and a counterbalance to Kurdish expansion there. What happens in and around Aleppo, where the Russian-backed regime forces are currently fighting Turkey-supported opposition forces, will be the real litmus test as to whether or not burgeoning Turkish-Russian relations also entail a strategic alignment.

It is unrealistic to expect a full pivot to Russia — even if the two countries agree on Syria and Turkey renews a bid to enter the Russian-led Shanghai Cooperation Agreement. That has a more symbolic than a real value in terms of Turkey’s foreign policy direction. But this visit to Saint Petersburg will likely usher in closer ties with Russia and send strong message to the West – that Ankara has options. 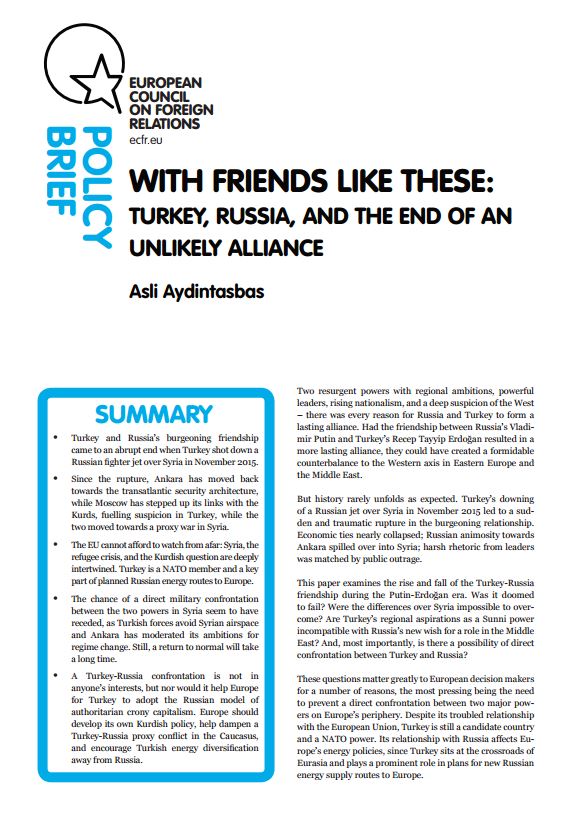 With friends like these: Turkey, Russia, and the end of an unlikely alliance

The growing friendship between Russia and Turkey in recent years was a problem for Europe. But their recent bust-up – after Turkey shot down a Russian fighter jet over Syria in November 2015 – is an even bigger one.