Donald Trump tweets on China and Taiwan, and the think tank community trembles. Forty five years of steady US dealings with and about China – mixing engagement and criticism – seem about to go down in flames. Trump’s tweets overturned in a stroke the US’ longstanding ‘One China’ policy, which treats Taiwan as part of China, causing outrage in Beijing and concern among many in Washington about the potential repercussions. This is despite the fact that the One China principle remains aspirational for the People's Republic of China (PRC), and largely undesirable to a majority of citizens on the island. For decades, repeating that Taiwan was part of China has been an imposed exercise for the PRC’s partners. 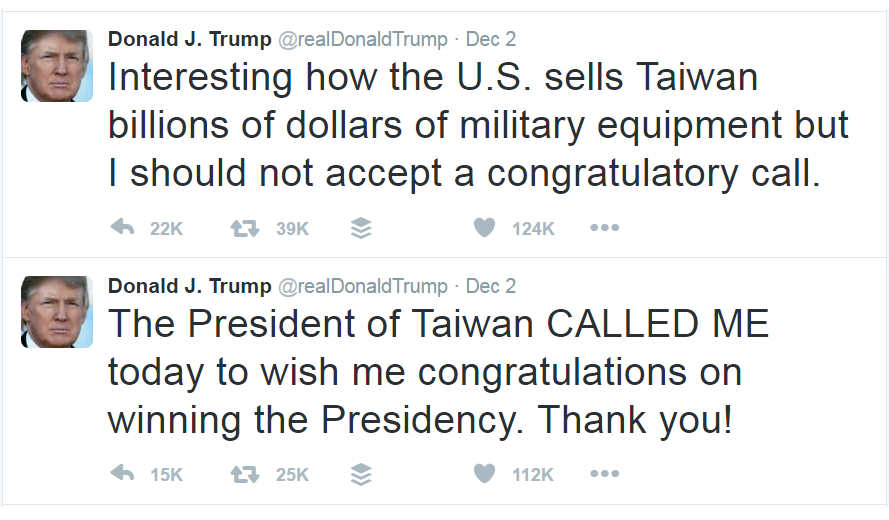 Hypocrisy is of course a prerogative of state to state relations, and the One China fiction has served its purpose – preserving peace around Taiwan and allowing the island to function as a full democracy with all the attributes of a state, save for international recognition. But Donald Trump is right to ask the question: what has the PRC given in exchange?

China’s military deployments facing the island have grown immensely, as have its deployment capacities in the Western Pacific.  It has challenged all of its maritime neighbours with not just territorial claims, but actual deployments. These combine hybrid capacities with the creation of new facts on the ground through artificial and militarized islands. The distinction between the PRC’s official and paramilitary navies was always a thin one, but even that line is being crossed today around the Senkaku/Diaoyu islands in the East China Sea.

The West’s hopes at the end of the 20th century for China’s integration into the rules-based system have been dashed by recent developments. The PRC’s political system has hardened and at the same time China has developed some of the world’s leading capacities for control over its citizens and for international interventions.

Much was made of China’s moves towards cooperation on climate change in the lead-up to the COP 21 summit, where China and the US self-imposed new targets for cutting emissions. But those who stand ready to pounce on Donald Trump’s energy policies (which are indeed likely to be disastrous) as undoing this achievement, should note that China had resumed increased coal production and imports before Trump even won the US primary.

And to complete the circle back to Taiwan, the PRC had initiated sanctions and broken off official contact with the island in May, following the election of a president whose political affiliation displeases China. None of this can be considered responsible global citizenship on the part of China.

We cannot yet know how consistent and coordinated president Trump’s foreign policy will be; it is clear that he will continue to spring surprises, often by Twitter. But we should take note of what he has not tweeted about: Russia (except to castigate a CIA report on Russia’s interference in the presidential campaign) and the Middle East, where war rages on. This tells us something about his approach to allies: he is less interested in continuing what he sees as a senseless feud with Moscow, or in the problems in Europe’s neighbourhood than previous presidents.

If America does pivot away from its traditional European allies, it will find willing replacements in Asia, eager to redress the balance in a region dominated by China. Japan’s Shinzo Abe has thrown his lot in with the president-elect, clearly less concerned about the possible demise of TPP than by the existential threat from China, while India’s Narendra Modi certainly has no prejudice against alliances with colourful strongmen leaders. Putin’s willingness to engage with Trump is of course already well known.

Europe still matters to the United States, but it does much less for itself than Asia in security terms, having left all the heavy lifting to the US in recent decades. It lacks a coherent foreign and security policy, and has terrible relations with the two regional powers of Russia and Turkey. In this context, engineering an alliance with the likes of Russia, India and Japan in order to cap China’s ambitions could well be more valuable to Trump’s United States than imposing sanctions for eternity on Russia as a favour to Europe.

The return of the Taiwan issue gives us an inkling of what might be to come. But before lamenting that Donald Trump signals the end of the liberal world order, Europe should sit up and take notice that it has done little to defend it. The postwar era was indeed a golden age for Europe. But it was already in decline before the US election this year. Trump, in his unique style, is merely pointing out that the emperor has no clothes.