When travelling across Europe these days, I have noticed how once again the economic policy debate in Germany has completely decoupled from that in the rest of Europe. While the euro periphery is still licking its wounds from the euro crisis, in Germany a new narrative of the crisis management of the past years is taking hold: self-congratulation for a supposedly great policy response to the crisis. 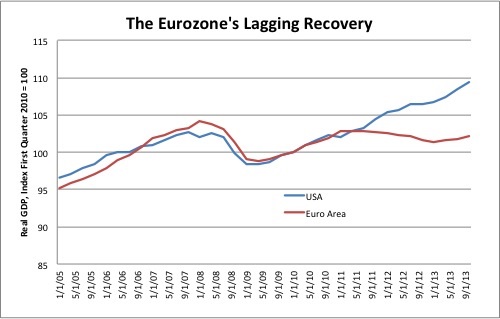 In short, the new German view runs as follows: The euro crisis is over. The euro is saved. All this shows how successful the German-dominated crisis management has been – with its strong focus on austerity, balanced budgets, and strict “nein” to Eurobonds. And who has to be thanked for that, if not Angela Merkel? Wasn’t it her who pushed tirelessly for this policy stance across Europe and helped teach the EU partners the virtues of fiscal and macroeconomic thriftiness?

In Germany, this narrative has taken hold far beyond the usual supporters of austerity. Last week, Mark Schieritz, one of the leading (and most intelligent and informed) German financial journalists and a long-time critic of Merkel’s austerity path asked pointedly in the weekly Die Zeit: “Do I now have to apologize to Angela Merkel?”, implying that he might have been too harsh in chastening the popular chancellor.

Having read this far, most readers from West of the Rhine or South of the Alps are probably now gasping in horror. “Certainly this cannot be the general mood in Germany?”, I was asked last week by a flabbergasted French journalist after I had tried to explain the German debate to her. I’ve gotten similar reactions in Portugal and Greece.

Of course, whether you judge Merkel’s policies a success depends on how you define the baseline.

Let us take an analogy from medicine: Imagine you prepare dinner on a Sunday night and cut your hand badly with a sharp knife. The bleeding does not stop and you are taken to an emergency room. The doctor comes in and explains that he has decided not to use a standard thread and needle to stitch up the cut, but thinks that a new, experimental treatment should be applied. As your hand hurts badly and you do not see an immediate alternative to this hospital, you agree and are administered a new drug. Soon after, you fall into a coma. Over the following several months, the doctors battle for your survival as complication follows complication. After six months or so, you regain consciousness again and four weeks later you take your first post-coma steps. At some point, you are transferred into a rehabilitation centre and your are told that there is a good chance you will be able to work and live normally with full use of your hand five to ten years down the road.

Of course, the hospital’s doctors in this case deserve thanks that they have saved your life. But would you call the treatment “a success”? I doubt it.

Now back to the euro crisis: Of course, worse policy outcomes are imaginable. The eurozone could have broken apart, dragging the European and global banking system with it in an amplified Lehman moment, leading to a global recession. Compared to this outcome, indeed, European crisis fighting has been a success. But is this the right benchmark?

Going back to the medical analogy: How do you know whether a treatment has been a success? A good comparison is if you look at other patients and see whether they have recovered more quickly, and with less serious complications.

For the euro area, a sensible comparison here would be the United States. At the onset of the euro crisis in 2010, both regions were just moving out of the Great Recession caused by the US subprime mortgage crisis and the Lehman Brothers’ shock. Both economies had seen similar drops in GDP during the crisis, in both regions, banks had experienced similar losses. In a number of ways, the eurozone economy at this point was even in better shape than the United States: gross government debt-to-GDP ratio in the US stood at around 95 percent in 2010, compared to 86 percent in the eurozone. And let’s not forget that the subprime mess had originated in the US, not in the euro area.

Then the euro crisis struck and the two regions diverged in their policy reactions. President Obama’s administration decided to only reduce budget deficits gradually, while in the eurozone, a cold turkey approach of budget cuts was administered. The Federal Reserve embarked on quantitative easing. At the same time, in the eurozone, the European Central Bank was slow to support governments with liquidity problems. Not soon after, a fear of a euro-break up emerged and risk premiums in many euro countries shot up. Banks on this side of the Atlantic stopped lending and the region slipped into a deep recession. In contrast, the US economy continued its (albeit at first shaky) recovery.

While of course a recession is something no one hopes for, how bad has the recent European recession really been in monetary terms? One – very straightforward – way to answer this question would be to calculate how much output has been lost relative to a scenario in which the eurozone economy had grown with the same pace as the post-subprime-crisis-US economy (see graph). If anything, this approach should underestimate the costs of the eurozone recession as the euro crisis has also created uncertainty in the US and hence dragged growth down there as well. Without the euro crisis, both the US and the eurozone could have grown more strongly than the US economy has.

If we now cumulate the deviation of the eurozone’s output path from that of the US from 2010 (the onset of the euro crisis) to the end of 2013, we find out that lost output in the eurozone for this time alone adds up to roughly 10 percent of annual GDP, or €950 billion in total, the equivalent of almost €3000 per capita.

And this is not the end of it: As annual output in the eurozone relative to 2010 levels now runs about 8 percent lower than the expected outcome from following the US path, every year, we lose another €750 billion of output. Of course, once the eurozone is growing faster then the US economy, this gap will start to close. But even with optimistic estimates it will be decade before the gap is closed (if ever). Accumulated losses in the end could then easily be several times the €950 billion we’ve seen in initial losses so far.

Purely rated according to economic performance, it is hence very difficult to construct a “success” out of the eurozone crisis management.

Defenders of the German government’s policy stance would now argue: This might be true, but economic growth is not everything. The US policy of persistently high deficits is irresponsible. At least, Europe has reigned in debt excesses.

Unfortunately, a look at the data is sobering, even when it comes to debt. According to the IMF’s latest “World Economic Outlook”, gross government debt as a percentage of GDP (the most widely used measure) in the US increased between 2010 and 2013 from 94.8 to 104.5 percent, roughly by the same number of percentage points as in the eurozone (where the government debt level rose from 85.7 to 95.2 percent).

One might now wonder: How is this possible that the profligate United States and the much more responsible eurozone under German guidance saw similar debt level increases? The answer is that debt sustainability is not just a function of deficits, but also of economic growth. And the euro crisis management did one thing clearly: It slowed growth. And as we now see in the figures, it curtailed growth so starkly, that not much was won with respect to debt sustainability.

So, if the poor economic balance of the crisis-fighting measures is so obvious, why does the German public not see through it?

One reason might be tunnel vision. The economic climate in Germany is not bad. Unemployment is at a record low and the German economy is benefiting from record-low interest rates, caused both by the ECB’s lose monetary policy and capital inflows from the periphery into the German government bond and covered bond markets. Young Germans only encounter double-digit unemployment rates in news reports.

The other reason might be German elite’s and media’s adherence to ordoliberalism – an economic policy concept has always had an anti-empirical approach. Ordoliberals rely on principles to determine what is right and wrong, and do not rely on data from messy reality to draw conclusions. So who needs to look at GDP or unemployment data to evaluate whether a policy was good or bad? After all, Germans know, without a doubt, that they have been right about austerity. Isn’t it obvious that thrift is better than profligacy?