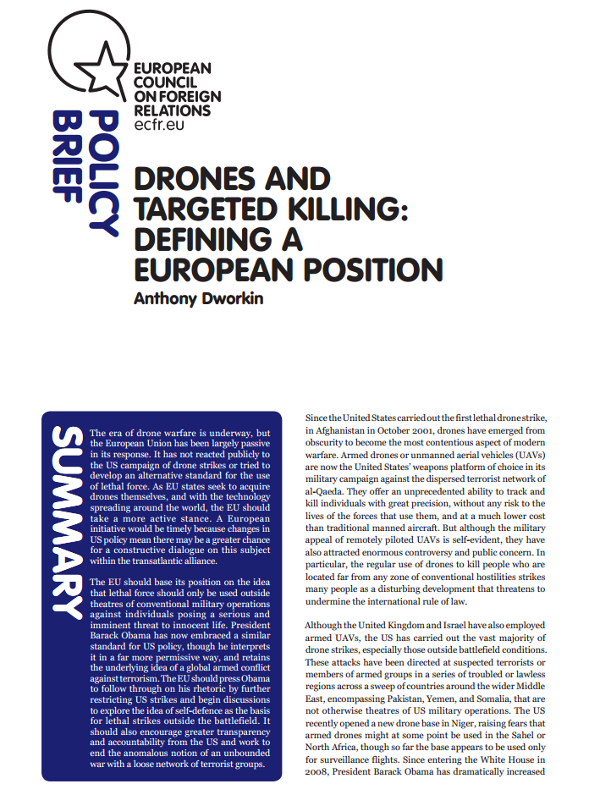 Relations between the United States and Europe hit a low point following revelations that Washington was spying on European Union buildings and harvesting foreign email messages.

Behind the scenes, though, it is not data protection and surveillance that produces the most complications for the transatlantic intelligence relationship, but rather America's use of armed drones to kill terrorist suspects away from the battlefield. Incidents such as the recent killing of at least 17 people in Pakistan are therefore only likely to heighten European unease.

In public, European governments have displayed a curiously passive approach to American drone strikes, even as their number has escalated under Barack Obama’s presidency. Many Europeans believe that the majority of these strikes are unlawful, but their governments have maintained an uneasy silence on the issue. This is partly because of the uncomfortable fact that information provided by European intelligence services may have been used to identify some targets. It is also because of a reluctance to accuse a close ally of having violated international law. And it is partly because European countries have not worked out exactly what they think about the use of drones and how far they agree within the European Union on the question. Now, however, Europe’s muted stance on drone strikes looks likely to change.

Why? For one thing, many European countries are now trying to acquire armed drones themselves, and this gives them an incentive to spell out clearer rules for their use. More importantly, perhaps, Europeans have noticed that drones are proliferating rapidly, and that countries like China, Russia and Saudi Arabia are soon likely to possess them. There is a clear European interest in trying to establish some restrictive standards on drone use before it is too late. For all these reasons, many European countries are now conducting internal reviews of their policy on drones, and discussions are also likely to start at a pan-European level.

But as Europeans begin to articulate their policy on the use of drones, a bigger question looms. Can Europe and the United States come together to agree on when drone strikes are permissible? Until now, that would have seemed impossible. Since the September 11 attacks, the United States has based its counterterrorism operations on the claim that it is engaged in a worldwide armed conflict with al Qaeda and associated forces — an idea that President Obama inherited from President George W. Bush and has been kept as the basis for an expanded drone strike campaign. European countries have generally rejected this claim.

However, the changes to American policy that President Obama announced in May could open the way to at least the possibility of a dialogue. Obama suggested that he anticipated a time in the not-too-distant future when the armed conflict against al Qaeda might come to an end. More substantially, he made clear that his administration was in the process of switching its policy so that, outside zones of hostilities, it would only use drone strikes against individuals who posed a continuing and imminent threat to the U.S. That is a more restrictive standard than the claim that any member of al Qaeda or an associated force could lawfully be killed with a drone strike at any time.

European countries might be more willing to accept an approach based on this kind of “self-defense” idea. However, there remain some big stumbling blocks.

First, a good deal about Obama’s new standards is still unclear. How does he define a “zone of hostilities,” where the new rules will not apply? And what is his understanding of an “imminent” threat? European countries are likely to interpret these key terms in a much narrower way than the United States.

Second, Obama’s new approach only applies as a policy choice. His more expansive legal claims remain in the background so that he is free to return to them if he wishes.

But if the United States is serious about working toward international standards on drone strikes, as Obama and his officials have sometimes suggested, then Europe is the obvious place to start. And there are a number of steps the administration could take to make an agreement with European countries more likely.

For a start, it should cut back the number of drone strikes and be much more open about the reasons for the attacks it conducts and the process for reviewing them after the fact. It should also elaborate its criteria for determining who poses an imminent threat in a way that keeps attacks within tight limits. And, as U.S. forces prepare to withdraw from Afghanistan in 2014, it should keep in mind the possibility of declaring the war against al Qaeda to be over.

All this said, Europe also has some tough decisions to make, and it is unclear whether European countries are ready to take a hard look at their views about drone strikes, addressing any weaknesses or inconsistencies in their own position. If they are, the next few years could offer a breakthrough in developing international standards for the use of this new kind of weapon, before the regular use of drones spreads across the globe.